Yesterday I ran the “Trail du Confluent” (13km), a lovely countryside race in Pinsaguel which I had already run last year. I had one of the worst experiences ever while doing sport, if not the worst. I suffered what in Spanish we call “pájara“ and in English would be collapse.

From the km 4-5, I started feeling weaker and at the end I was almost incapable of running. I had only had one such previous experience cycling about 13 years ago, when after biking for 60km we made a pause and my cousin Unai had to literally push me on my bike from his for over 10km back to home as I could not cycle anymore.

These collapses happen from time to time to runners or bikers, and to avoid them it is recommended to eat and drink well before and during the race. I ate and drunk but I guess it was not enough. Other possible causes could be: 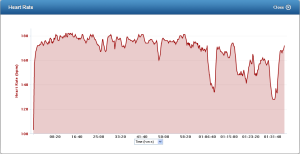 Heart rate during the race.

Nevertheless, it is not worth it to worry much about it. This is sport: there are days for glory and days of wandering around like an underdog. Continue training, sleeping, drinking and eating well and the next race will be a different story.