If I tell you that investment banks way of making you rich is advising you to “Buy high and sell low”, you’d call me stupid, you’d think I got the sentence wrong (obviously the way to become rich is “buying low and selling high”).

Take a look at the chart below. It’s taken from an investment bank report of EADS at the end of 2007 (let me omit the name of the bank out of courtesy… nevertheless, all banks incur in the same vices). 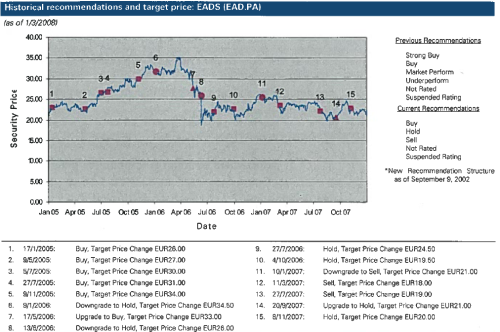 EADS historical prices from 2005 to end 2007 and investment bank's target prices and recommendations.

Each time that the bank recommended “Buy” the stock actual price was just between 7-16% below the bank’s estimated target price (e.g. 31.5€ vs 34€, -7%). Benjamin Graham concept of “margin of safety” advises you to invest only when the margin between the price you’ve estimated as the stock’s intrinsic value and its current price is above 30%, otherwise possible errors in your judging of the price will eat away possible gains.

That means, that if the intrinsic value of EADS had been well estimated at 34€, and the price was 31.5€, still the recommendation should have been “hold” or “sell”, never “buy”. A “buy” should have come only when price was below 23.8€ for a target of 34€…

That was regarding the margin of safety… was the intrinsic value of EADS really 34€? I have checked statements of EADS several times since its creation. I have never come to that figure as its intrinsic value. Even discarding all the one-offs that have occurred in the last years, the conservative price I reached never went upper than 24€ (a price reached at some point in 2011 – when I sold my stock). That means that the stock would have been a “buy”, had I been the banker, only when its price was under 17€ (which was never the case in the period shown in the report – but for a long period afterwards).

Last Christmas, my brother gave me “The Snowball: Warren Buffett and the Business of Life“, by Alice Schroeder. He completely hit on the spot, though I only started reading it during last August holidays (Luca also started reading it to the point that she ended up buying her own Kindle version of it!).

The book is a thorough review of Buffett’s life, including relationships with family & friends and investment decisions. I had previously read other books about Buffett, but they were merely about his investment “strategy” so to say, nothing compared to this one. To complete the book, the author made over 250 interviews, so you can imagine the many insights contained in it.

There are many lessons or just ideas that can be taken from this book. Let me just point the few I can recall at the moment of writing this post:

Throughout the book you get to learn about many great entrepreneurial characters (e.g. Rose Blumkin, Bill Gates); about the workings of the board of directors of some companies (e.g. Coca Cola, Berkshire Hathaway); about some of the most impressive falls in corporate history (e.g. Solomon Brothers, Long Term Capital Management); about several depressions, recessions and crisis; and above all you learn about what were the thoughts and calculations behind some of Buffett’s investments decisions since the early 1940’s to date.