The Foreign Military Sales (FMS) is a program managed and operated by US Department of Defense (DoD) on a no-profit and no-loss basis. Countries and international organizations participating in the program pay for defense articles and services at prices that recoup the actual costs incurred by the United States. This includes a fee (currently 3.8% of what the defense articles and/or services cost, in most instances) to cover the cost of administering the program.

Foreign countries may also opt to procure directly from American contractors in Direct Commercial Sales, though FMS ensures third countries rates similar to those received by the DoD (bargaining power) but the items will be the standard procured by the USA, not especially tailored to the needs of other countries. In any case the sales will have to pass the same approval requirements for the sale of defense materials to third countries.

The Defense Security Cooperation Agency (DSCA) is the one managing this program and the one which publishes the different deals (Major Arms Sales Notification and FMS Contract Awards).

The DSCA also publishes historical data of the FMS sales by year and per country and region. (I have always admired the openness of the different US agencies in their publishing of data to work with).

In the graphic below you can see the total US arms sales agreements with foreign countries and FMS-program agreements during the last 40 years. 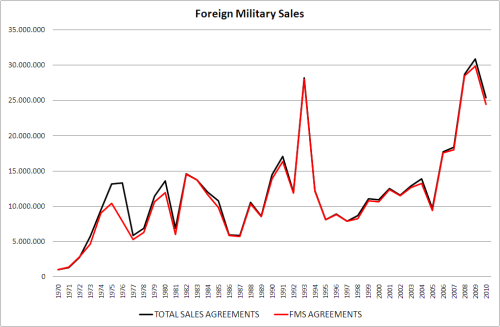 Total Military Sales (*) and FMS-program agreements (in k$) per year.
[(*) Total Sales includes foreign sales not made through FMS program]

You can see how most of the agreements are close within the FMS program, which ensures moderate costs to the third countries and a standardization for US allies. You can notice as well how the first Gulf war and the recent wars in Irak and Afghanistan have increased FMS agreements.

However, given that military equipment takes time to build, there is a lag between those sales agreements and when the arms are delivered. See below the two lines representing FMS agreements and FMS deliveries (both in k$). 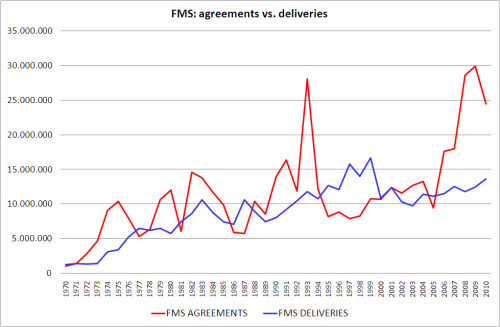 FMS (in k$): agreements vs deliveries per year.

You can see how the deliveries show a growth trend since the 1970’s, with peak at the end of ’90s.

The following question is: to which countries were those sales… 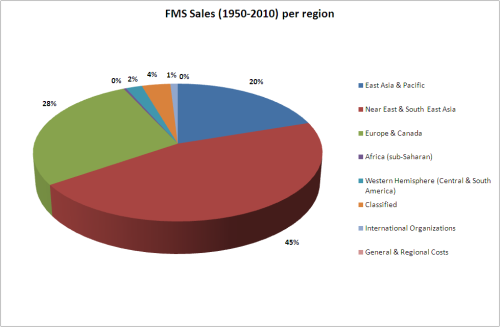 I will end this post with this graphic, showing how the Middle East (“Near East & South East Asia”) is the region which received the most of FMS during the last 60 years. In a following post I will dive into which specific countries as that is a very interesting analysis deserving a single post.

4 responses to “US Foreign Military Sales”