In the last post I described the Fly Out to Les Châteaux de la Loire that we made the last weekend. In that post I mentioned that we visited the museum Espace Air Passion in Angers airport. This post will be dedicated to that beautiful museum.

This museum is owned and run by an association, the “Groupement pour la Préservation du Patrimoine Aéronautique” (GPPA), created back in 1981 by a group of friends around the project of restoring an old aircraft (a jewel) from René Gasnier, a local pioneer of French aviation who flew in 1908 along 1km in an airplane built by himself. That airplane is the first one you get to see in the museum:

René Gasnier built his first airplanes between 1907 and 1908. This model, the III was built in 1908. As you can see it was made of wood and cloth. It mounted an Antoinette engine with 8 cylinders in V, with a power of 48hp, wingspan of 10m, less than 500kg at take off. It took the enthusiasts of GPPA over 1000 hours to restore it.

This airplane is surely not the only unique piece of the museum. Take a look at the following two airplanes. 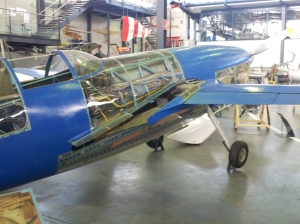 The Gérin “Varivol”, built in 1938 (by the Compagnie Française d’Aviation), was based in the concept of using moving wings which extended themselves increasing the wingspan at the time of take-off when more lift was needed and reducing the wingspan to decrease drag at cruise. A prototype was successfully tested in the wind tunnel of Chalais-Meudon in 1946, however the actual airplane seems to never have flown. Had it flown, it was to have a cruise speed of ~455km/h while only 92km/h for landing speed. The wings were to be extended/retracted 2.75m per side out of a total retracted wingspan of 8.10m. 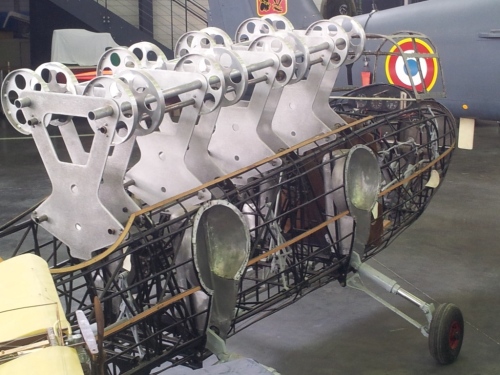 Built in 1937 by René Riout (at the workshop of Louis Breguet) with duralium, the 102 T explored the concept of flying by batting its wings (4, two at each side of the fuselage). During its test in 1938 when the pilot increased the engine regime up to around 4500rpm, after a few seconds, the observers saw torsion vibrations in the tip of one the wings before it broke, closely followed by the other 3 wings. It was then dismounted and forgotten till 2005 when the restoration at GPPA started.

This reminded me of a quote attributed to Igor Sikorsky that goes like:

Another oddity of the museum is one of the only two prototypes (1) ever built of the Moynet Jupiter (designed by André Moynet) which had the rare configuration of two push and pull engines, one in the front and one in the back of the fuselage. It was never sold to any customer, but it flew for the first time on December 17, 1963 (60 years after that glorious day in Kitty Hawk). 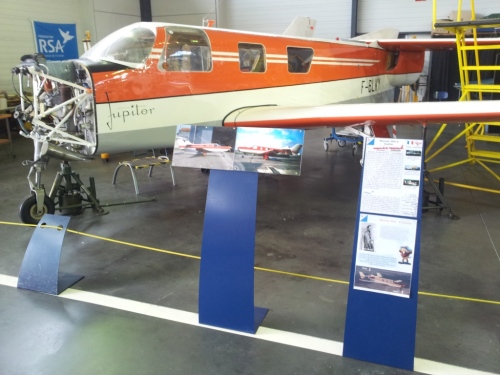 The museum has these other two sailplanes which have been declared patrimoine de l’aviation française due to the records they collected in their high time, the Caudron 800 Épervier and the Avia 40P:

We also enjoyed the visit to the workshops where they restore the fuselages and the wings. Take a look at the pictures and notice the wood and the cloth. Forget about those pictures the next time you get onboard a general aviation airplane.

Wing torsion box… made of wood.

We were given a guided tour by two members of the association, their explanations, anecdotes, connection with French famous pilots (including former Airbus’ test pilots) were invaluable. On the other hand, the audience couldn’t have been more responsive. Take a look at the pictures above: scores of years of aerospace engineering experience (flight testing, training), thousands of flying hours as pilots, real aviation geeks at its best.

The museum also has playing area for children, a MH-1521 Broussard for children (an adults) to get on and play, and some other beautiful aircraft including a Caudron PC431 Rafale, a Morane Saulnier 505, a Piper L4H Grasshoper, or the car Marcel Leyat Helica… see them below:

(1) The other prototype is at  the Musée de l’Air et de l’Espace, at Le Bourget.