About a month ago, on the evening of July 3rd, it took place the XVI edition of the “Corrida Pedestre de Toulouse“, arguably the most popular race in the region with a participation of about 5,000 runners among the two distances, 3 and 10km (4,089 finishers in the 10km).

In the previous post I stressed how satisfying the experience is of running a race end to end in the company of friends. In the case of this race, I was lucky enough to have my friend Jose visiting us in Toulouse (being an aerospace professor, he made a study trip to Airbus during those days). Thus, we subscribed together to the race and we ran it again end to end together (1).

The Corrida is always a nice run as it goes through all the main streets of Toulouse. This year the organization had announced a revised circuit which had been measured again (2). Strangely enough during the race itself the circuit was also different to what had been announced! [PDF, 782KB] See it below: 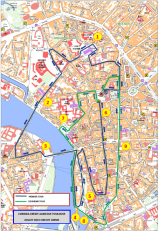 Announced circuit for the 2015 edition. 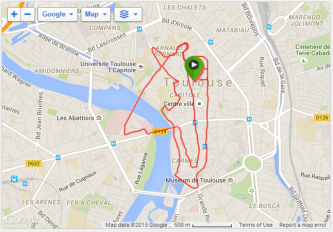 Real circuit we followed (note the difference in the second loop).

But the essence of the race is kept: very good atmosphere in Capitole square both before and after the race, the chance of running through the main streets of downtown Toulouse (Alsace Lorrain, Saint-Rome, Metz, Quai de Tunis, Pont Neuf, Pont Saint Pierre…) emptied of cars for the occasion.

My friend Jose and I finished in the 534th and 535th positions in ~46’19” (that is among the first 13% runners; though that is aided by the amount of casual runners who take to the streets on this day). That is about 3 minutes slower than it took me last year. 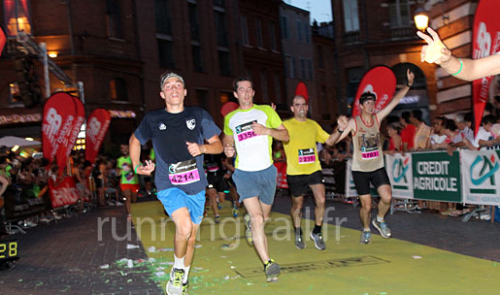 Jose and I running the last metres (right side of the photo).

Within Airbus, we also arranged a team of above 30 runners to take part in the race, with the result of winning the companies challenge with accumulated time among our first 5 runners of 3h20’27”!

(1) To be honest, I lost him at the km 7 when he took some 10 metres of advantage that extended to some 50m  by the 9th kilometre, but he then waited for me so we effectively completed the last stretch together again.

(2) In the previous years there had been complaints that the circuit was shorter than 10km. That had also been my experience (9.63km).