Usain Bolt has recently won the gold medal in the 100m of Beijing Athletics World Championships, with a time of 9″79, that is the 34th best ever time.

In the previous post, I wanted to highlight the size of the figure of Carl Lewis as an athlete, but a long jump athlete. I want to recap here the following graphic: 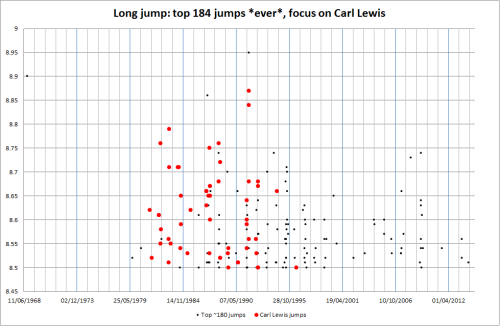 In this post, I want to compare Usain Bolt and Carl Lewis as 100m sprinters. I will use as a source again the website with all time best performances in track and field (maintained by Peter Larsson).

In the previous graph you can notice that times in the 100m have significantly improved since the 80s. Usain Bolt is today way faster than Carl Lewis was in the 80s.