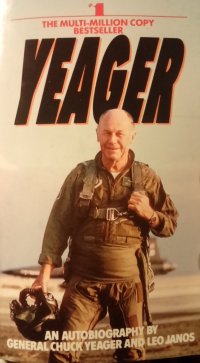 Chuck Yeager was the US Air Force flight test pilot that broke the sound barrier for the first time on October 14, 1947, flying on board of the rocket-propelled Bell X-1. That part of his biography is widely known.

Reading his autobiography you discover that he went from being an uneducated child in rural West Virginia to retiring as a general of the US Air Force, acquainted with several US presidents and other dignitaries, he was the first pilot to become ace in a single day by shooting down 5 German fighters at World War II. Previously, he had been shot down by the enemy when flying over France near Angouleme, he escaped the Germans on ground with the help of the resistance and crossed the border to Spain via the mountains carrying the heavily injured body of a fellow American. He fought as well in Korea and Vietnam, he flight tested dozens of American aircraft and a MIG 15 taken from the North Korea, he set up and led the Air Force Space school which provided for plenty of astronauts for NASA initial space programmes, he became friends of female aviator legend Jackie Cochran, and altogether made him receive plenty of medals and recognitions. Plenty of remarkable achievements in a lifetime.

Many considered Yeager the best pilot in the Air Force at his time. What it seems clear is that he had a privileged eye sight which allowed him to spot enemies, trouble, etc., much earlier than others. He had a deep knowledge of the machines he flew despite of his initial lack of engineering education. He overcame that by eagerness to learn, by continuously asking to the best engineers available to him, and thanks to his experience in maintenance. And he flew a lot. He repeats several times throughout the book that experience, flying continuously, flying plenty of different aircraft, was what made him a great pilot. Despite of those assets, he recognizes as well that luck played a big role in shaping his career. From being born in a time when the flying over the speed of sound was something unknown to surviving various close calls both in war operations and during flight testing.

Let me quote some of the gems I had marked in his book:

“I got sick the first few flights […] like everyone else, I sweated through my first solo.”

“… most of us reached a point where, if a pilot borrowed our Mustang on our day off and was shot down, we became furious at the dead son of a bitch. The dead pilot might have been a friend, but he wasn’t as special as our own P-51…”

“I was still the most junior officer in our squadron […] there were several captains who were rubbed wrong being led by a new lieutenant. One of them was assigned to my flight of four, and refused to follow my orders. […] We were over Germany and this guy was flying as tail-end charlie, but lagging too far back in the rear, and ignoring my order to close up. […] I did a big barrel roll and came in behind him; he never saw me. Then, I fired a burst right over his canopy. The bastard saw that. He closed up immediately, and did what he was told.”

“Flying came with the marriage licence, and I had no problem with that.” (Glennis Yeager)

“I doubt whether there where many who loved to fly as much as I did.”

“Wright Field was a fun place to be, loaded with every airplane in the inventory…”

“[…] the real barrier wasn’t in the sky, but in our knowledge and experience of supersonic flight.”

“Arrogance got more pilots in trouble than faulty equipment.”

“The real art to test flying was survival; maybe only a spoonful of more luck and more skill made the critical difference between a live test pilot and a street name.”

“The best pilots fly more often than the others; that’s why they’re the best. Experience is everything. The eagerness to learn how and why every piece of equipment is everything. And luck is everything, too.”

“And luck. The most precious commodity a pilot carries.”

“I was always afraid of dying. Always. It was my fear that made me learn everything I could about my airplane and my emergency equipment […]”

I strongly recommend the reading of this book (423 pages in the paperback edition).