The march toward fiat money

Fiat money is “money that derives its value from government regulation or law. The term derives from the Latin fiat, meaning “let it be done” or “it shall be [money]”, as such money is established by government decree”.

The different types of money along history can be seen in this entry from the Wikipedia:

“Currently, most modern monetary systems are based on fiat money. However, for most of history, almost all money was commodity money, such as gold and silver coins. As economies developed, commodity money was eventually replaced by representative money, such as the gold standard, as traders found the physical transportation of gold and silver burdensome. Fiat currencies gradually took over in the last hundred years, especially since the breakup of the Bretton Woods system in the early 1970s.”

I found an interesting graphic in the book “This Time is Different” (C. Reinhart & K. Rogoff) where you can see how during several centuries governments debased or decreased the content of silver of its currency in order to get over heavy debts. The trend in the graphic seems to point at the “inevitability” of fiat money. 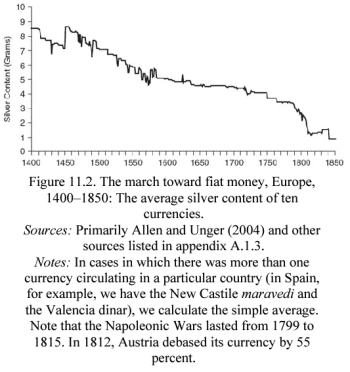 The march towards fiat money.

These debasements of course created inflation, which is nothing new, only the means have changed, as Carmen Reinhart and Kenneth Rogoff say in their book:

“[…] the shift from metallic to paper currency provides an important example of the fact that technological innovation does not necessarily create entirely new kinds of financial crises but can exacerbate their effects, much as technology has constantly made warfare more deadly over the course of history.”

The Republic of Poyais

While I was in primary and high school, History never caught much my attention. And today is not otherwise in a broad sense, but I enjoy reading some historical notes on certain subjects.

I am reading these days the book “This Time is Different” (published in 2009), by Carmen Reinhart and Kenneth Rogoff (both Economics professors, the latter former economist at the IMF and member of the board of the Federal Reserve). As the description in Amazon says, the book is:

“[…] a comprehensive look at the varieties of financial crises, and guides us through eight astonishing centuries of government defaults, banking panics, and inflationary spikes–from medieval currency debasements to today’s subprime catastrophe. […]”

Being half way through it, I have had much fun with some anecdotes. I may write more about them in other posts, but in this one I want to focus in one I came across while reading the book (I have already shared it with some of you).

Let me take some excerpts from the Wikipedia:

Gregor MacGregor (24 December 1786 – 4 December 1845) was a Scottish soldier, adventurer, land speculator, and colonizer who fought in the South American struggle for independence. Upon his return to England in 1820, he claimed to be cacique of Poyais (also known as Principality of Poyais, Territory of Poyais, Republic of Poyais). Poyais was a fictional Central American country that MacGregor had invented which, with his help, drew investors and eventually colonists. […]

Gregor MacGregor went from Latin America to London, England, in 1820 and announced that he had been created cacique (highest authority or prince) of the Principality of Poyais, an independent nation on the Bay of Honduras. He claimed that native chieftan King George Frederic Augustus I of the Mosquito Shore and Nation had given him the territory of Poyais, 12,500 mile² (32,400 km²) of fertile land with untapped resources, a small number of settlers of British origin, and cooperative natives eager to please. He had created the beginnings of a country with civil service, army and democratic government. Now he needed settlers and investment and had come back to the United Kingdom to give people the opportunity.

At the time, British merchants were all too eager to enter the South American market that Spain had denied to them. The region had already become more promising in the wake of wars of South American independence, when the new governments of Colombia, Chile and Peru had issued bonds in London Royal Exchange to raise money. […]

You may read the rest of the story in the Wikipedia, but you can imagine it. Of course, Poyais defaulted on the debt issued, about 70 would-be settlers were sent to Latin America only to find that the wonderful Poyais did not exist. The group decided to come back to London. About 20 of them died in the trip and when they arrived to London about a year after departing MacGregor had already fled to France to proceed with similar schemes…

The Ponzi scheme of Madoff pales in the comparison to the one prepared by MacGregor. Beware when someone presents you with an opportunity too good to be true…