Just a few weeks ago I wrote a post about the Wall Street Monkey. Remember that the story was based on Burton G. Malkiel’s book, “A Random Walk Down Wall Street”, where he suggested that a blindfolded monkey throwing darts to select stocks wouldn’t do worse than professional fund managers.

I watched yesterday TED Talk by Laurie Santos, “A monkey economy as irrational as ours”, where she explains how she studied whether our mistakes were due to a badly designed environment or badly designed minds.

She made several studies with apes, introducing the use of money to them… and she found that apes show the same irrational behaviours regarding risk taking as we humans do…

I loved especially the following passage around minute 16:30…

This is the first take-on message of the top… if you saw the beginning of this and you thought: “…oh! until I go home and hire and put a monkey as financial advisor … they were cuter than ours…”, don’t do that: they’re probably gonna be just as dumb as the human one you already have!”

At least, apes would charge us less… just a couple of grapes. 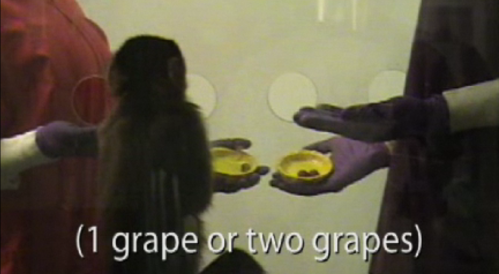 “A monkey economy as irrational as ours”, by Laurie Santos.