Dear Congressman, send the C-27Js to The Boneyard

I read yesterday the following article from Aviation Week & Space Technology: “U.S. Coast Guard Patrol Aircraft May Fall To Cuts“. Part of the article stated the obvious, that the Coast Guard modernization programs may fall also victims of the budgetary pressures faced elsewhere in the Department of Defense or Department of Homeland Security. However, the following passage caught my attention:

“While the results of the portfolio review, started in April, remain to be seen, the Coast Guard has not given up on gaining new equipment. Obama administration officials are looking at transferring at least 14 newly built Finmeccanica C-27J transports from the Air Force, which has controversially declared them “excess” to its needs. As CRS reported, if the Coast Guard were to receive 14 or more C-27s, it could stop procurement of EADS HC-144A maritime patrol aircraft (MPA) at the halfway point, with 18 aircraft, saving $887 million.”

I was amazed, since:

If I were an US Congressman looking for savings across the US Armed Services, I would have it clear: instead of interfering with sound acquisition programs, I would simply get those C-27Js already acquired, send a couple of them to museums and the rest to The Boneyard in Davis-Monthan Air Force Base, to lay there forever close to their older brothers the C-27As and avoid any cost-ineffective operating and maintenance expenses on them… 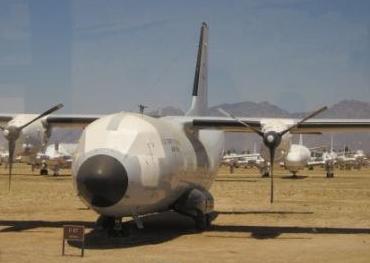 The only cost-effective C-27s are in the desert (or already scrapped).

2 responses to “Dear Congressman, send the C-27Js to The Boneyard”