Eating garlic at The Stinking Rose

Looking for a book shop in San Francisco we saw the exterior of The Stinking Rose restaurant: 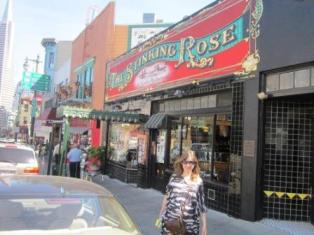 It first caught Luca’s attention, and we went to check the menu and whether there was any description in the guide (which there was). The restaurant is a garlic restaurant started by an Italian some decades ago, meaning that all their dishes included garlic! I loved that and immediately tried to persuade Luca to get in.

Description of the restaurant.

Have you seen that sentence: “We Season Our Garlic with Food”? Take then a look at the first dish we ordered: garlic bread, with minced garlic with herbs plus garlic… 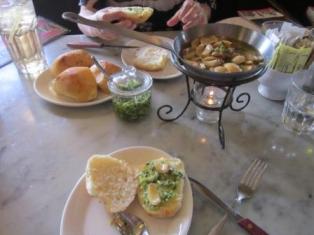 Finally, take a look at how the interior is decorated with garlic bulbs all over the place (it reminds me to “Museo del Jamón” in Spain):

Garlic bulbs all over the place!

I guess that many of the readers will think “yuck!”, as Luca did at the beginning. Well, this is because you have never tried it… do so the next time you are either in San Francisco or Los Angeles.

At the beginning of the year I had just a few objectives in relation to running:

Now, just one week after mid-year it’s a good moment to take a look at how these months have gone regarding the running part:

I have already run 2 marathons (Rome and San Diego) though in none of them I was under 3 hours 45 minutes. In Rome I was close to it (a minute slower) but didn’t reach it. I will even run a 3rd marathon this year in Athens next November (health permitting).

I have run 3 races of 10 kilometres. In the first one of the year I was short of only 6 seconds to beat my PB (46:14) clocking 46:20. One of the other two was a cross and the third one was the Corrida Pedestre de Toulouse, where the distance is not even 10k but 9.64km and despite of that I was not in the rhythm to do any PB.

In relation to the mileage: in the first 6 months I ran 920 km, a bit less than 1,000km, but not a difference that I can’t make up for in the second half of the year.

Some weeks ago Luca and I spent a weekend in the Central Massif in France, a plateau the size of Castile and Leon, with an average height of around 600m.

On Friday we went to Chaudes-Aigues where we wanted to spend the saturday in a spa. The village, in the region of Auvergne, has less than 1,000 inhabitants, a couple of hotels and restaurants and its famous for its hot springs. With over 30 different springs starting from 45ºC to 82ºC, the latter is supposed to be one of the hottest ones in Europe (if not the hottest as proudly announced in the signpost close to it).

Luca by the 82ºC hot spring in Chaudes-Aigues (arguably the hottest in Europe… the spring as well).

Another curious thing of Chaudes-Aigues is a network of hot water going through private houses built back in the year 1,332, which is still working today though only in those original houses.

On Sunday morning, we woke quite early to cover the distance to Nasbinals, another little commune in the region of Aubrac where I wanted to run a ~18km trail. 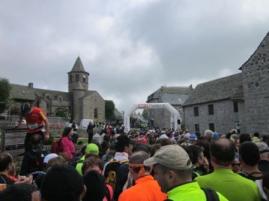 Start line of the trail.

I started the trail in the back of the pack so I took the first kilometres without stress trying to run with the crowd and only overtaking other runners where possible and moderately easy. In that way I could enjoy at some points the views offered by the circuit of the trail, which at points was through closed forests but at some others was through open countryside.

I was running with the water bag and carried some vanilla-flavoured energetic gels, so I did not have any problems with supplies, I didn’t need to use those provided by the organization. One good point of the trail is that the route was very well marked, however, the measuring of the distance wasn’t. The trail was supposed to be 18 kilometres long, and when my GPS-watch indicated 17.75km I saw a signpost saying “Arrivée 2 km”. In the end I measured 19.60 km, but I guess the organization knows this, as in their own web, when showing the altitude profile, the distance they have measured is clearly over 19km.

Profile of the race “Trail des Capucins” (over 19km instead of the announced 18km).

It is not such a big issue, though you may have been managing your strength resources to have a last good kilometre and instead you find out that there are still 2 more to go! It would be as easy as to announce the trail as a 19km or 19.6km instead of 18km.

Even if not of very good quality, you can find below a short video I recorded around the 8th kilometre to give a glimpse of how these trails are:

I uploaded the video