If in a previous post I described the feast of garlic we had in The Stinking Rose, now I will tell you about the shrimp feast we had in Bubba Gump Shrimp Company restaurant.

The restaurant is part of a franchise with about 40 restaurants in the world, half of them in the USA and the other half overseas (for the readers of the blog living close to one of them, this post will be nothing surprising).

If you were wondering: yes, the restaurants are named after the movie Forrest Gump. We learnt from the Wikipedia that just one year after the release of the movie, the idea came up and the licensing and setting up such a restaurant chain began.

When I saw the movie I didn’t particularly like it very much. I thought it was too much of it. But then after some years I caught some sympathy for the character of Forrest because of being yelled “Run Forrest” at some times by someone thinking very funny of himself when you passed-by running and he was drinking some beer with his friends.

So, during the last trip to California I didn’t hesitate in trying out one of these restaurants, and we visited the one at Pier 39 in San Francisco. I loved the experience! (No need to say that I have always loved shrimps…)

Before entering the restaurant the chances are that you may take some picture as the one below (this one is from the Universal Studios restaurant, though): 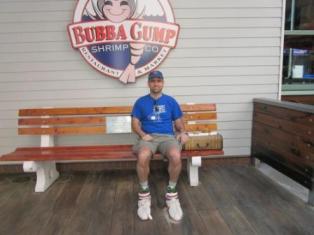 Bench alike the bus stop of the movie Forrest Gump.

The restaurant is fully decorated with images and memorabilia from the movie. I had not watched the movie in years, but it was nice to be reminded of it in that way. Catching up passages when seeing pictures, reading catchy sentences…

Some of those catchy phrases have turned into very useful things. E.g., in some restaurants it’s hard to catch the eye of an elusive waiter, no matter whether you want to order, to pay, or to ask anything. If they want to, the waiters will manage to avoid making eye-contact with you. In Bubba Gump restaurants this stress is eliminated by the introduction of two signs with the texts “Stop Forrest Sop”, to call for the waiter, and “Run Forrest Run”, to let him know you are OK.

“Stop Forrest Stop” signpost to call for a waiter. 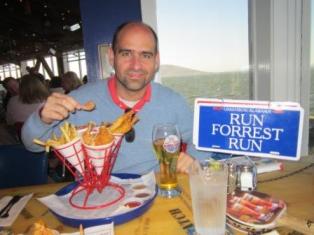 Another thing that we kind of liked was the small quiz presented to us by the restaurant manager: she asked some 5 questions about the movie for us to earn the already ordered meal! (I think we failed the test, but they allowed us to eat anyway :-)).

Finally, I admire the fact of having built up a whole franchise based just in a passage from a movie. You may think of the many movies with which you could try that (e.g. a “007 Martini Bar” where all cocktails from James Bond movies are prepared and the place is decorated with memorabilia from the movies) but then I cannot recall having seen such opportunities being chased.

Eating garlic at The Stinking Rose

Looking for a book shop in San Francisco we saw the exterior of The Stinking Rose restaurant:

It first caught Luca’s attention, and we went to check the menu and whether there was any description in the guide (which there was). The restaurant is a garlic restaurant started by an Italian some decades ago, meaning that all their dishes included garlic! I loved that and immediately tried to persuade Luca to get in. 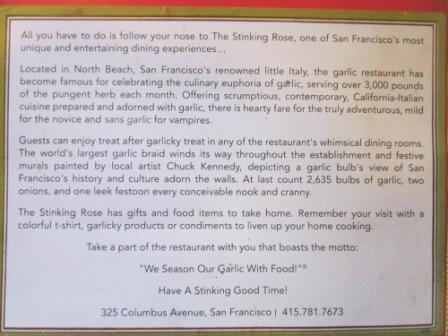 Description of the restaurant.

Have you seen that sentence: “We Season Our Garlic with Food”? Take then a look at the first dish we ordered: garlic bread, with minced garlic with herbs plus garlic…

Finally, take a look at how the interior is decorated with garlic bulbs all over the place (it reminds me to “Museo del Jamón” in Spain): 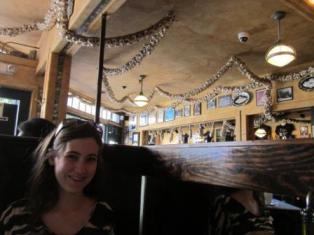 Garlic bulbs all over the place!

I guess that many of the readers will think “yuck!”, as Luca did at the beginning. Well, this is because you have never tried it… do so the next time you are either in San Francisco or Los Angeles.