Mauvezin is small commune at the west of Toulouse, in France. It is located in one of the many small hills of the department of Gers. In the village a fortress was built, which apparently was dreaded elsewhere in the surroundings, and that gave the name to the village “Mauvais voisin” (bad neighbour or “mau vesin” in Occitan).

The village counts with about 2,000 inhabitants, who every second Sunday of October organize the race “Ronde des Foies Gras“. Today, it has been the 3rd time I have run this race. Simply great. It is a moderate (just almost 300m of positive elevation) trail along 25km around the village. It counts with several supply posts and that is what takes this trail apart. 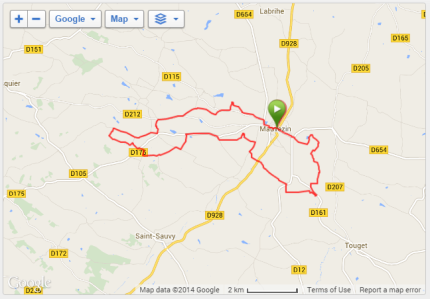 Route of the race as recorded by my Garmin GPS.

Even if the race is in October, every year thousands of runners rush to fill in the papers in June in order to book a place in it. Only 2,000 are accepted and get to eat the foie gras made at each of the 7 farms that the race crosses. This year I decided to run dressed up in a costume of a prisoner as there was a gift for those completing the race in disguise. I also decided to take a photo camera with me and take some pictures along the race, so you can get a glimpse of the experience.

The experience itself was terrific. Lots of fun and delicious foie gras, plus a great meal afterwards. It was however too hot to be running in costume (the gift at the end was a t-shirt, so the next year I’ll leave the costume in the drawer).

See this other video of the music band playing at the 5th farm:

I finished in 2h21′, 5 minutes more than it took last year but taking into consideration the costume and time employed in taking the pictures I am happy with the run (especially the first 12km), as a training for the coming NY marathon.