At the time this post is being published, two friends (Carlos and Lorenzo), my brother and I are about to start the New York City marathon; the most popular marathon in the world, with over 50,300 finishers in 2013 and a similar amount expected this year (hopefully the four of us included).

The race was organized for the first time in 1970 and has been run every year since then with the exception of 2012 due to the aftermath of the hurricane Sandy. This race, no doubt, has played a big role in promoting marathoning. In 1970 there were only 127 participants, out of them only 55 men finished. Just six years later there were over 2,000 runners taking part in it. Now the number exceeds that by 25 times.

The popularity, together with the iconic flavour of the city of New York plus the importance of the race (one of the 6 World Marathon Majors) make it a race that every marathoner would like to run at least once in a lifetime. Thus, my brother already mentioned last year “hey, Javier, nowadays that we are still fit enough we should consider giving it a try”, and so we did earlier this year. We entered the draw with some friends and I was fortunate enough to get a place. My brother got his through an international travel partner of the organization and off we went.

I started the 16-week training plan for the marathon on July 14th. Up until the time I prepared this post, 14 weeks had passed. Along them I had run over 675km, an average of 48 weekly kilometres (I exceeded 50km in 8 of those weeks). I did about 20 sessions of series training, I ran 8 long runs over 20km (3 of them over 30km) and took part in 4 races (10k, half marathon, 25km trail and 33km trail). I am not in the fastest shape that I have been in the last year but I feel comfortable with the training I have followed. 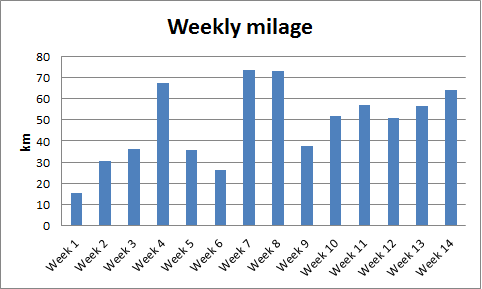 Weekly mileage completed along the training plan for NY.

Back to the race. We will cover the 42.195km by running through all the 5 neighbourhoods of New York, departing from Staten Island. We will take there the Verrazano bridge to Brooklyn, where we will run for miles along the long avenues (4th, Lafayette, Bedford…) until reaching the half marathon then Pulaski bridge to enter in Queens. There, a few turns, reaching the km. 25 and ascending the Queensboro bridge listening nothing but footsteps, sensing the feeling of entering into Manhattan with 16 more km to go. We will turn left to take 1st avenue and head north for 4 miles all the way to the Bronx and from there we will head south by the 5th avenue, entering in the Central Park to complete there the last miles of the race.

I guess that with Geoffrey Mutai in the roster of participants I will not get much time in the tv live. In any case, if you want to follow it, the running bib to pay attention to is the 25451.