In the previous years I have been estimating the discounts Boeing applies to its list prices of commercial aircraft. You can see here the result of last year estimate (based on 2013 figures). The results I arrived at are that Boeing has been increasing its discounts in the recent years, and that in 2013 they topped ~47%. 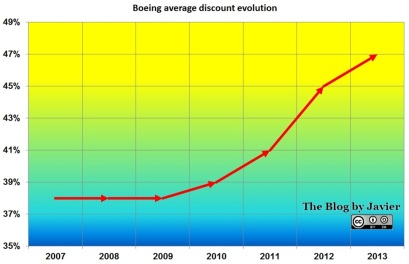 With this post I wanted to take a step ahead and put the model to the test by using it for forecasting what will be Boeing Commercial Airplanes revenues for the year 2014.

As of today, January 15th, these have not been announced yet. In Boeing’s investor relations website you can see that the 2014 earnings conference call will take place on January 28th.

How will I reach to my forecast?

In the 2014 Q3 report you can see Boeing’s own guidance for year-end figures:

Second, in the 2014 Q3 release, you can see the revenues up to end September (below). In them, you can see that up to then, revenues of Boeing Commercial Airplanes had increased 13% in relation to 2013 (12.66% to be more precise). My forecast is a bit more optimistic here as well: at year end the increase in revenues will be +13.6%.

Final comment: if Boeing managed in 2014 to command better prices on delivered aircraft, the figure will be even higher. If the figure is lower than the 60.2, and in line with their forecast, it’ll mean that the market is forcing Boeing to apply ever higher discounts to their published list prices.

I am now looking forward to January 28th and Boeing’s earnings call!

As announced, Boeing published on January 28th its full 2014 results [PDF, 838KB]. Which were the Boeing Commercial Airplanes revenues?

That is 59.99bn$, or 206m$ short of my detailed forecast of 60.196bn$. This means that I missed with my forecast by a 0.3%, not bad. Even better taking into account that the main discrepancy have been the lower level of services under the commercial airplanes unit.

(2) If my forecast turns out correct some may be tempted to say that this is the usual trick played by CFOs: to present better figures than expected.