Capitalism is ingrained in human nature

A former boss I had used to say something like:

Capitalism is so ingrained in human nature, that even in the Soviet Union, not having studied or heard about it and its demand and supply laws, soviets knew how much could be charged for goods or services in the black market… (1)

I remembered those words very well when we travelled last year to New York to run its marathon.

On Friday 31st, October, we arrived to New York by car, coming from a tour that had taken us to Dayton. Before going to the hotels and leaving the rental car, we wanted to go by the Marathon Expo to retrieve the running bibs. It was located at the Javits Center, by the 11th Avenue between the 34th and 39th streets, in Manhattan. 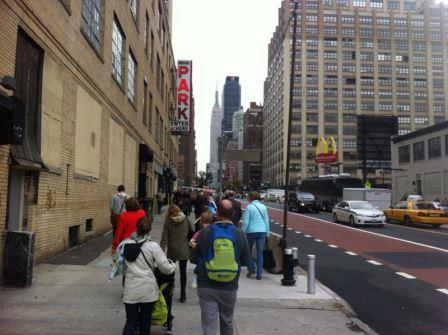 In the picture you can see a sign post saying Park (at the 34th). That is where we left the car while we went to the Marathon Expo.

Waiting to be attended at the car park, we were reading a panel with prices: 16$ the 1st hour, the following hours being cheaper. The driver in the car in front of us started a discussion with an employee of the car park which went more or less like this:

(1) He referred to Capitalism as the economic system in which trade seeks for profit and how demand and supply laws work, don’t look any further in the comment.

(2) The driver of the Porsche Cayenne did so, too.