To my old GPS watch 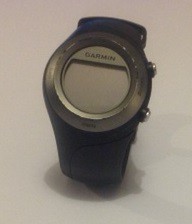 A few days ago I picked my new running watch which incorporates a GPS (1). The previous one, a Garmin 405 Forerunner was a present from Jaime and Luca back in the Christmas period of 2010 to 2011.

At that time, I had then just moved to Toulouse and they thought that it would be a good gift to incentivize the expressed wish to take on running again. And how it worked! With the new watch I started to measure some running tracks, track my heart beats, beat my personal records, record every run, run plenty of races, race and train with friends…

In just half a year I lost about 20 kilos and completed about 900km. Never before I had run so often so constantly. It helped me to run firstly slower focusing on the heart and then faster focusing on the pace. It helped to introduce tempo and series sessions in the training.

In these 5 years, wearing the watch almost at every run (2), pacing myself with it, making numbers in my head about rhythms, times, kilometres, etc., I have completed over 9,000 km, more than 50 races, including 10 marathons and 2 ultras.

Since the last summer it started to work faulty. Sometimes it switched itself off, it re-started by itself, it didn’t recharge the battery well… The last time it recorded well a complete activity was on October 29th, when we ran together 7km, just 4 days after having completed the Toulouse marathon. Maybe it needed more time to rest.

(2) Except for having for some times in which I forgot it or its battery went out.