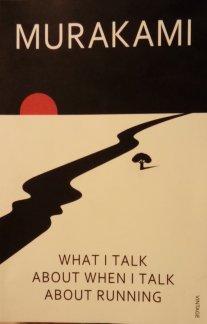 Haruki Murakami is Japanese writer of World fame. Murakami happens to be a consistent runner since the early 1980s, about the same time as he went full-time with the process of becoming a professional writer. “What I Talk About When I Talk About Running” (2007) is an autobiographical book in which the author not only explains what running means to him but also how he turned from running a bar to becoming a writer, from being a rather sedentary person to training about 60 km weekly, running at least a marathon a year for over 25 years, etc.

Murakami draws some parallels between running and writing:

There are some other passages that drew my attention while reading the book that I want to share:

“Nobody remembers what stupid things I might have said back then, so they’re not about to quote them back at me”. (Think now about today’s social media)

“I’m struck by how, except when you’re young, you really need to prioritize in life, figuring out in what order you should divide up your time and energy. If you don’t get that sort of system by a certain age, you’ll lack focus and your life will be out of balance.”

“Have you ever run sixty-two miles in a single day? […] I doubt I’ll try again, but who knows what the future may hold. Maybe someday, having forgotten my lesson, I’ll take up the challenge of an ultramarathon again” (No need to tell me that)

“[…] Thus the seasons come and go, and the years pass by. I’ll age one more year, and probably finish another novel. One by one. I’ll face the tasks before me and complete them the best I can. Focusing on each stride forward, but at the same time taking a long-range view scanning the scenery as far ahead as I can. I am, after all, a long-distance runner.”

If you are a frequent runner it is quite easy to relate to the author in several passages (1). In my case, it has been from the races he has taken part in (New York or Athens marathons), to the experiences lived in a 100 km ultra marathon, the thoughts or lack of them while running, the balance found in training, etc.

The book is rather light (about 180 pages in the version I have) and makes for a good reading, however, if he ever wins the literature Nobel prize it won’t be for this book. 🙂

(1) I guess that for a professional writer there may be several parts easy to relate to as well.

Tagged as book, book review, Haruki Murakami, marathon, reading, running, What I Talk About When I Talk About Running