Today’s Iowa caucuses made me remember some anecdotes of a trip we made five years ago which took us through Iowa. I already wrote a post about the visit we made to the Iowa Aviation Museum, but I had not yet written about El Bait Shop, arguably the best bar in America.

After driving all the way from Chicago, we stopped for the night of Thursday 28th April 2011 in Des Moines, Iowa. While changing clothes in our room at the Rodeway Inn motel, by the interstate 80, I went through some flyers and recommendations for tourists. One caught my attention: “the best bar in America” (1).

Some minutes later we left for Des Moines downtown and after some driving and walking around we looked for the bar, which wasn’t easy to find. Once inside the first thing that catches your attention is the amount of beer taps, 180! 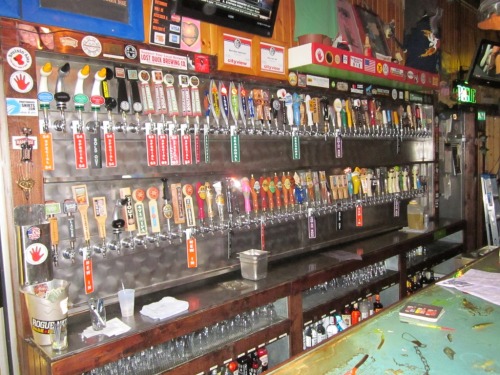 The bar itself is comfortable, with a very good service, quite cheap and with nice music. After receiving some tips from one of the waiters we decided to pick a couple of “beer flights” to taste some 12 different beers (accompanied with some food) (2). See below the flights.

El Bait Shop offers many more beer options than the 180 that are in the taps. They change the beers on the menu on a monthly basis, continuously incorporating new brands. You can check the menu today, and you can see below the menu in April 2011.

I want to call the attention on the fact that most of the beers on offer, almost all, are brewed in America, by small breweries producing all kinds of varieties. When you read in the menu “German Hefeweizen” you do not see Paulaner… you see brands from Oregon, Texas or California. When you see “Belgian Ales & Belgian Style Ales” only 3 out of 22 on offer come from Belgium.

The experience was great. A nice surprise in the middle of a road trip. That’s serendipity.

Outside of El Bait Shop.

(1) When reading the tip I also thought that the claim might be overrated. Not so after visiting the bar. I invite you to Google “best beer bar in America” or something similar, I bet you’ll find El Bait Shop among any top bar list.

(2) No need to mention that the beer flight I took was “Flyin’ High”.