Quiz: How loaded do US Air Force transport aircraft operate?

Let me share with you one funny quiz I did for some colleagues at the office:

Before continuing reading below, take your chance in the poll below, where I offer 4 possible responses: 3 from my colleagues’ responses to the quiz plus the correct one:

Background. Before posing the quiz to my colleagues we were commenting on a piece of news of an Antonov 124 which had landed in Spain to load some equipment weighing 1,000 kg. The An-124 reported payload capacity is 150 metric tonnes. For those not being number-crunchers: that means using the one of the biggest cargo aircraft to load it up to 0.7% of its capacity.

After having read this last paragraph you may have changed your opinion as to which is the correct answer to the quiz.

I based the correct result on a news release from the US Air Force dating from the beginning of 2007. At that time I was working in Airbus Military strategy where I would like to pick up any number related to aircraft and play with it (the hobby has stayed). That release offered figures US Central Command air transport operations, including operations Enduring Freedom (Afghanistan) and Iraqi Freedom. Find the results from that short number play: 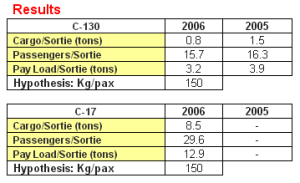 “What a waste of resources!” you may think. A former senior colleague pointed to that result: “You buy a Mercedes to travel with the family and baggage, then on a Sunday when having to go out to get some bread or any week day when you go alone to work… when you get to the garage and find a Mercedes… Guess which car you take?”