Santos, Pelé and the Memorial das Conquistas at Vila Belmiro

Santos is a port city about an hour drive from Sao Paulo, crucial for the development of the coffee industry in Brazil and the inflow of slaves from Africa in the XIX century. But Santos is mainly known today because of the Santos football club. The Santos football club is known because it was there where Pelé played for the most of his career. And Pelé… 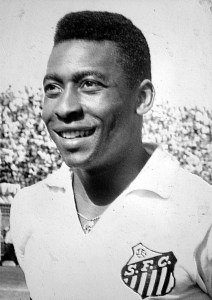 “My name is Ronald Reagan, I’m the President of the United States of America. But you don’t need to introduce yourself, because everyone knows who Pelé is.” Ronald Reagan (at a visit of Pelé to the White House)

In my third trip to Brazil, I wouldn’t let it pass away the opportunity to rent a car, drive from Sao Paulo to Santos and visit Vila Belmiro, the stadium of Santos FC and the museum “Memorial of the conquests” (Memorial das Conquistas).

Named the “Athlete of the Century” by the International Olympic Committee, Pelé joined Santos when he was 15 years old  (in the museum you can see his first contract as professional) and in his first complete season he finished as top scorer of the league with just 16 years. At age 17 he scored 58 goals in the league; a record that still stands today… With Pelé, Santos went to win:

Today, Santos it is neither the team with more Paulistas championships (Corinthians (27), Palmeiras (22) and Sao Paulo (21) are ahead in that ranking), it shares the lead in Brasileiraos with Palmeiras (both with 8), it is not the club with more Libertadores cups (8 teams are ahead in that ranking, led by the Argentinean Independiente (8), Boca Juniors (6), Peñarol (5)… including Brazil’s Sao Paulo with 3) nor is the American club with the most International Cup (Peñarol, Boca Juniors and Nacional de Montevideo won 3). And despite of all that, the club Santos was declared by FIFA as the best club of the XX century in the Americas (4). Because it was in Santos where Pelé played, and with him the team reached the summit in the 1960s when it lived a dream decade, the years of Os Santásticos who achieved 25 titles between 1959 and 1974. Santos, according to FIFA was the first team to reach the 10,000 goals scored and has plenty of other goal records (5). It was in that Santos that Pelé was the first attacker reaching the mark of 1,000 goals scored (6).

Those days are long gone. Nowadays the club, Santos, wanders around the 100th position of the World Best clubs (7), struggles in the Brasileirao (ending between 7th-9th in last 3 seasons) and most great players are continuously sold (8). However, Vila Belmiro still captures very well the essence of the good old times.

Vila Belmiro, or rather the Urbano Caldeira stadium, was built in 1916, close to the port of Santos. It is a small stadium with capacity for barely 17.000 spectators. Thus, for some important matches Santos plays in the bigger stadiums of Sao Paulo (mainly at Pacaembu (9)). Nevertheless, it’s a cozy stadium, where you have a good view of any spot of the field from anywhere. I liked especially the boxes at ground level named after the great players of the history of the club (10).

The tour of the stadium included a visit to the locker rooms (each locker in the local team room named after the club’s legends, with a special spot for Pelé), the tunnel to the field (well separated from the visitor’s tunnel, each at a different corner of the stadium), the field, the benches.

I definitely recommend the visit to the museum and the stadium. You will be submerged into the history of football for a couple of hours (if you chose to read everything) for just 13 R$ (about 3 euros). 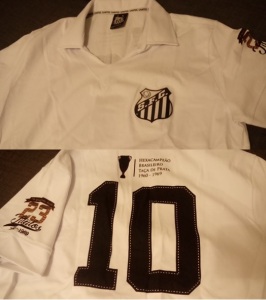 (1) Arguably the most important of Brazilian states’ tournaments.

(3) Created in 1960, is the South American equivalent to the then Europe Cup and nowadays’ European Champion’s League.

(4) The award was based on a vote by the subscribers of the bi-monthly FIFA World Magazine (see here). For the record, with over a 42% of the vote, Real Madrid was elected as best club of the century.

(6) Pelé holds the Guinness World Record for being the player with most goals scored, 1,279.

(8) Unlike Pelé, who in 1961 was declared as a national treasure in order to prevent him from being transferred to richer European clubs.

(9) At the municipal stadium of Pacaembu there is another museum, the Museo do Futebol, which I also visited and about which I may write at a later point.

(10) I only referred to Pelé in this post but in Santos played at some point in time as well: Gilmar, Coutinho, Clodoaldo, Carlos Alberto (the latter two were part of Brazil’s 1970 World Cup final roster), and most recently Robinho, Ganso and Neymar.