During the past week we spent some days in Paris and we were staying at a hotel in the suburb Issy-Les-Moulineaux (1). One of those days, I had to spend some time while Luca was studying and I decided to go and visit the Musée Français de la Carte à Jouer (French Museum of Playing Cards), which I learnt that same day that it was located just some blocks away from our hotel.

The museum is the only museum dedicated in France to playing cards and one of a few in Europe (apparently it received in 1999 the European prize for the museum of the year). The museum covers the origin of playing cards (certainly from the far East, even if there are different hypothesis), the uses they are given (to play, to learn (to memorize things, to learn to count…), to fantasize (tarot)), some historical facts related to the cards, etc.

At first I thought it would simply cover the playing cards we are used to when playing poker or bridge and explain different games, but I was mistaken. It did not enter into the games themselves, but it covered many other types and variations of cards, used for different games. Think of role plays, think of the cards used in games such as Monopoly, think of theme cards, etc…

Aviation related cards to play “Quartett”, a game originated in Germany to play in family.

Axterix-related cards, with packs of 6 coming from different comics.

Egg-shaped card (design from Rodolfo Krasno, pictures in the cards from Michel Leclerc). 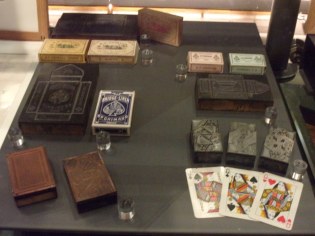 Playing cards using the “Spanish portrait” (printed in Casablanca), not used anymore in Spain but popular in Algeria, Morocco and Latin America.

As always that one visits a museum I was looking for some practical take away to learn.

If you happen to be by Issy-Les-Moulineaux, I recommend the visit of the museum (4.5 euros entrance fee).

Finally, the museum includes a documentation centre of the village which includes a small room dedicated to the history of aviation in Issy. This makes the museum a must-see of Paris (4). But I will discuss that in another blog post.

(1) If you are curious (as I was) about the etymology of the name of the village, Issy-Les-Moulineaux, can be found at the corresponding article of the Wikipedia. As a side note: the termination -y in the name of several villages in France is derived from the Latin -acus (“land of”), as Luca explained in her blog post “Ac Alors!“.

(2) There is in Vitoria a playing cards museum related to the company, see information about it here.

(3) I will leave to another day the explanation of my firm belief on the superiority of the Spanish game mus over any other playing card game that the reader may know.