Model of an airport

When I was in primary school I used to have a friend who had an impressive train model layout at home. Soon after, my parents gave me some very nice models that I still keep, though I do not play with them anymore and never continued to grow the layout nor purchased more train models.

Since I joined EADS I began collecting a few static models of aircraft: first an A380, then a Beluga, an A340-600, 2 A400M… Each time I stop at Schiphol airport with enough spare time I pay a visit to the model shop over there, so do I to Airbus online shop… 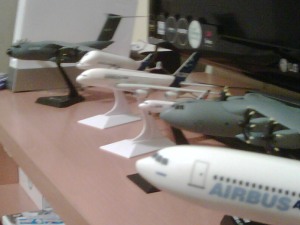 "Static" aircraft model collection at home... as of today.

However, few days ago, I found via Twitter a post in a blog that contained the following video of a model of an airport in Miniatur-Wonderland, Hamburg:

… if I take on this hobby it could be the beginning of my own end! What it’s sure is that whenever I go to Hamburg I’ll pay a visit to the place.

2 responses to “Model of an airport”