For Living or Investing 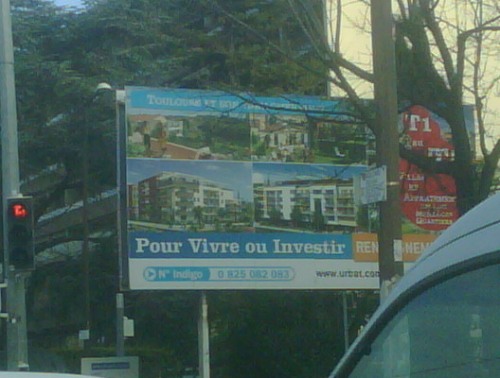 This is an ad I see every day on my way to the office: “For Living or Investing”. They sell villas and apartments up to 4 rooms.

I have often defended the position that a house cannot be considered an investment. Recently I read yet another article at The Economist, in which they showed the latest graphic of the Case-Shiller index (below). I showed this graphic in a post last year. Now the prices have decreased some percentage points more. Most importantly, the curve and the article point that a further decrease will come. Down to the point where the prices stay stable along the last 130 years once inflation is adjusted.

Taking that into account, when I see that ad in the morning I can only smile and think of that other story which I included in another post about a message from the future describing how the housing craze continues to go on in Spain for decades… (extremely funny – in Spanish).

I have only one complain to the promoter of these houses in the ad: they are using land so close to the city to build houses for investing… if these houses are just meant for investing, and not necessarily for living, they could have built them under the sea and leave the land in Toulouse for living, public parks, roads, etc…

One response to “For Living or Investing”