Boeing, in its Commercial Market Outlook forecast, currently downplays the potential of the A380. Two years ago, I wrote a post in which I collected some views from Boeing in 1996:

“Most major aerospace companies agree that airlines will require 500 to 700 airplanes capable of carrying more than 500 passengers. Boeing forecasts 500 airplanes will be needed by the year 2015. […]”

Going backwards further than 1996, I found in Flight International issue of 5-11 September 1990 the following chart showing Boeing’s estimate for the average size of airplanes up to 2005. It showed an ever increased average size:

Seven years later, in the 1997 CMO Boeing forecasted as well an ever-increasing average aircraft size (though trimmed from 1990 forecast): 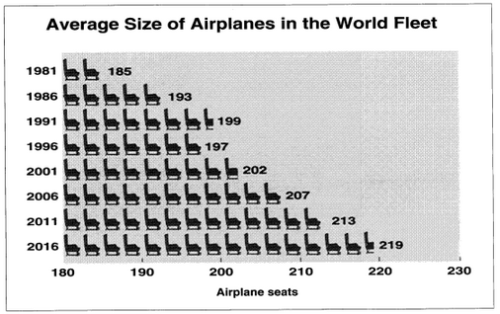 However, you may see the evolution since then in this other chart from Boeing’s CMO below:

In a following post I will compare how accurate these market forecasts are in general and by segment. As we will see, the general figures for fleet and for some segments were well predicted, not so for other segments.