Some weeks ago I made a comparison about Airbus and Boeing aircraft market forecasts. Last week I published a couple of posts about the evolution in the forecasted aircraft average size and on the accuracy of these market forecasts. For this, I looked for old issues of Boeing Current Market Outlook from as back as 1990.

The next step then it was obvious, I compiled the following graphic showing with the data available information over a 40-year span on: 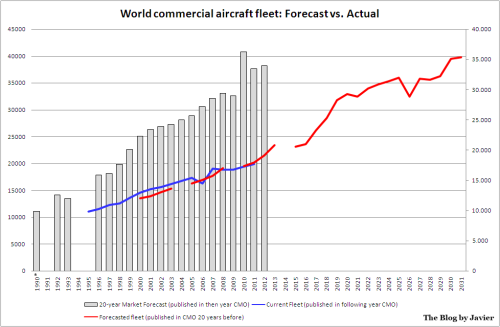 As you can fleets, forecasted fleets and market fleets have all been increasing year by year. The compounded annual growth rate (CAGR) for each one has been:

It is interesting to see that in those years when there is both figures for actuals and forecasted fleets the figures are close (-3.3% average deviation) and so is the trend, though forecasted fleet was lower at the beginning of that period (-7.2% in 2000) and grew at a higher rate until almost matching the numbers in 2011 (+1.2%).

Even though, the 20-year market forecasts have grown at a higher rate than fleets, it is mainly because the first data that I could retrieve come from the economic crisis of the beginning of the 1990’s, when Boeing trimmed down its forecasts. From the 2000’s the figures for market forecast have grown at a similar rate than those of fleets. And so will be the growth of forecasted fleet from 2011 to 2031: 3.5%.