Few days ago, Boeing released 2013 results [PDF, 841KB]. The company reported revenues of over 86.6bn$, 648 commercial deliveries and 1,355 net orders for its commercial aircraft. All these were widely reported by the media and mean a great year 2013 for Boeing (with increases in these metrics from 6 to 8%).

Last years, I wrote in some posts (1) what was my estimate of Boeing discounts: the relation between what is announced by the press, what appears in its list prices and sometimes as backlogs and what it is indeed computed into the profit and loss account. In this post I wanted to update, if necessary, the figure I calculated for the average discount of Boeing.

The number of gross and net orders (after cancellations) year by year can be found here.

Last year deliveries can be found in the report of financial results (or here). From there we can also deduce the figure of Boeing Commercial’s sales of services. That is not directly reported but can be deduced (all Boeing services-related sales are reported as well as Boeing Capital Corporation division and Boeing Defense’s “Global Services & Support” unit)

Having put all the figures together, the calculation is immediate. Boeing Commercial Aircraft revenues in 2013 (52.98bn$) are the sum of:

The updated figure (which minimize errors for 2013 down to 0.2%) for the discount for Boeing commercial aircraft is 47% (3). 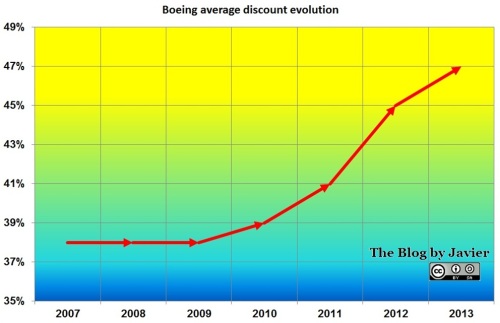 The explanation I can find for that increase shall be linked the built-in penalties for 787 plus the introduction of the new 787-10 with increased discounts for the launch customers.

(1) Find here what is becoming a “body of knowledge” on Boeing discounts: estimates calculated for 2012, 2011, 2010 and 2009; a review of the French portal Challenges.fr of aircraft discounts prior to Le Bourget airshow of 2013; a Bombardier’s CEO statement on what is known in the market as the Boeing discount; Boeing Commercial Airplanes president Ray Conner speaking about the more aggressive pricing they are being forced to offer.

(2) Two years ago, I received a comment from the analyst Scott Hamilton on the level of downpayments. He mentioned they could reach up to 30%. I tried this time to compute the calculation using that input, though the figures of discounts to be applied each year to minimize errors would have to be even higher, over 50% (!), thus I stayed with the 3% used in the above-mentioned published paper to stay on the conservative side.

(3) I find this trend of continuous increases in Boeing discounts in line with both Challenges.fr report and Ray Conner’s mentions of aggressive pricing last year, both referred to in note (1).