Referring to the different waves and streaks that football teams experience, the Argentinean Jorge Valdano made popular the sentence “A team is just a mood“ (1).

The Football Museum (Museu do Futebol) at the Sao Paulo‘s municipal Pacaembu stadium is an invitation to go through those moods, re-live some of those past moments anchored in the collective memory, by way of recorded sounds, cheering chants, radio excerpts of goals narrations, videos and interviews about the most important goals of Brazil history. 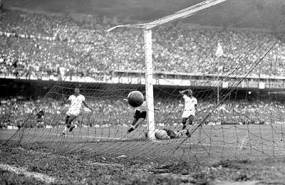 Yet, in my opinion, the most impacting mood, very well caught in the museum, is the transition from euphoria to depression, from music to complete silence, the tragedy of the losing the last match of 1950 World Cup between Brazil and Uruguay. A match that Brazil just needed to draw, started winning, yet lost it. The Maracanazo. In just 90 seconds, in a dark room you get submerged into the happiness of the day that would see Brazil win the first of many World Cups at the newly built Maracanã and then how the mood at the stadium changed with the first goal of Uruguay, then the second and at the end the final whistle from the referee.

Nevertheless, no matter how impacting the Maracanazo was for Brazil and football history, and how well captured it is at the museum, it would be unfair not to mention that in the museum there are many other very positive and happy moods of Brazilian football captured very well, too. If I went to think of Brazil, I would first think of happiness, football, music, dance; and those are experiences that accompany you along the museum.

The museum itself is centered around Brazil’s national football team, the only one which has won 5 World Cups to date, the country which practically at any point in time has one of the best 2 or 3 players of the World, the country of Pelé, Garrincha , Roberto Carlos, Ronaldo, Zico, Romario, Tostao, Rivaldo, Rai, Djalma Santos, Didi, Pepe, Gerson, Carlos Alberto, Rivellino, Socrates, Cafu, Bebeto, Rivaldo, Ronaldinho, Neymar… you name them. 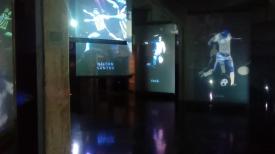 The visit starts with a room where some players are picked as the most important to Brazil’s history; some images and biography of each one of them is offered.

The following room is dedicated to the goals, the main ingredient of the game. The 30 most celebrated goals in Brazil’s history are recorded and narrated by the authors or journalists (in Portuguese, English or Spanish). Several interactive screens are available for visitors to go through the different goals. There are also some desks where to listen to radio narrations recorded at the time of some of those goals.

See some of them in the video below (2).

The following rooms are dedicated to recordings of the chants of all the main teams competing at the Brasileirao; to Charles Miller, the man who introduced football in Brazil; and to a collection of pictures the years in which football was introduced in Brazil, showing life in Brazil at the time.

The largest space is dedicated to the World Cups, all of them, not only the ones won by Brazil. Some context of the society, cultural movements and events going on at the time are shown, together with images of the Brazilian team competing at the championship, the winners, some charismatic players and vivid images of the competition. That is another room where to wander with time enough to be captivated by the evolution of football, the players and events of the times.

There is another space dedicated to the couple Pele and Garrincha: with them playing together in the field, Brazil never lost a match (out of some 40 joint appearances). Some personal objects, pictures and videos of their best tricks are shown.

The last rooms are dedicated to football rules, some statistics, women in football and the chance to try a penalty kick against a featured Julio Cesar, where your shot’s speed is measured (and then compared to a Roberto Carlos’ shot).

(2) The video is unrelated to the museum but contains some of the goals among those 30.