Sao Paulo from the top of Banespa building

Banespa building is an important skyscraper in the financial center of Sao Paulo. Banespa stands for Banco do Estado de Sao Paulo, which now is owned by Banco Santander. The building was designed by a Brazilian architect, Plínio Botelho do Amaral, who was inspired by the Empire State Building. It was for 20 years the highest building in Sao Paulo, until surpassed by Edificio Itália. 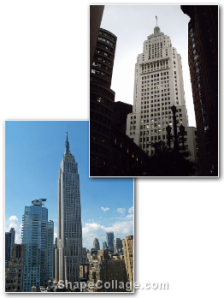 At the top of the building there is an observation deck from which you can see stunning views of Sao Paulo, with hundreds of skyscrapers in whichever direction you look at for kilometers and kilometers. Then you realize that you are in Sao Paulo, the 6th or 7th most populated city in the world (depending whether you look at the city limits or metropolitan area).

Other famous observation decks that I visited recently were the one in the ESB and the Top of the Rock at the GE Building Rockefeller Center, there are some differences though:

Race in New York. Let me share here with you a story about a race to build the tallest building that took place in the late 1920’s. I found this story in the book, “Tales of New York”, which I commented in a previous post.

Three buildings were being built at the same time, the 40 Wall Street, the Chrysler Building and the Empire State Building. Competition among them was fierce at the time, with names of big industrialists behind them. Plans were revised once and again. The first one in being finished was the 40 Wall Street in April 1930 which claimed the title of world’s tallest building at the time. Originally it was to be 840 ft but along the race the plan was revised to make it just 2 feet taller than the Chrysler building plan at the time 925 ft, at completion the 40 Wall Street height was increased to 927 ft.

During the last weeks of its construction loads of iron and steel were brought to the interior of the Chrysler building. People thought that it was part of the interior decoration, filled with metallic details and motives of the automotive industry. But once its rival building was finished, on a clear day in the morning a needle-like metallic structure was raised from the center of the top of the Chrysler building to the surprise of the population of New York. On May 27th 1927, the Chrysler building was finished, in the end measuring 1,046 ft, taking the title of tallest building from 40 Wall Street merely a month after.

Walter Chrysler had worked in the past together with the man behind the Empire State Building, John J. Raskob, then CFO of General Motors, one of the main competitors in the automotive industry. He wanted him to either fail in the pursuit of building the tallest skyscraper or becoming bankrupt if he made it. With 1,046 ft height the Chrysler was to be tallest than the Empire State Building when it would be finished, however in the year that took the ESB to be finished the design was subsequently changed measuring 1,454 ft when it was finally finished in 1931, taking the title of tallest building from the Chrysler just a year later.