In this post I wanted to share the list of books I read along the year (1) with a small comment for each one and links to some Twitter threads where I shared some passages that caught my attention while reading the book. I have also included a small rating from one to three “+” depending on how much do I recommend its reading. 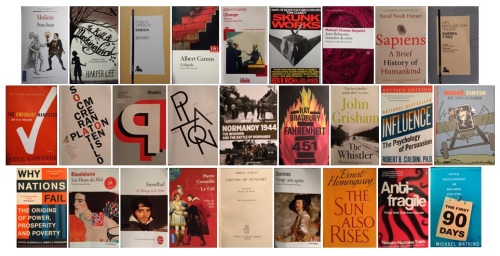 During this year again, I have been able to read at a higher pace than years ago, before I adopted a more rigorous approach following these two tips:

I wish you all very interesting reads in 2019!

It is known by nearly everyone in aviation industry the Lockheed Martin department: Skunk Works. It has its own website and it is were many planes have originated since World War II. We all have heard about the strict security rules and stories about how suddenly new aircraft were unveiled. Other companies have tried to establish similar departments; Boeing with its “Phantom Works” and EADS with its “Innovation Works”.

However, it was not until during my last holidays that I came to know the origin of the word, reading the book “Guide to Management Ideas and Gurus“, by Tim Hindle.

The name skunkworks originates from a cartoon series called “Li’l Abner” by Al Capp. The story is explained as well in the Wikipedia:

“[…] The “Skonk Works” was a dilapidated factory located on the remote outskirts of Dogpatch, in the backwoods of Kentucky. According to the strip, scores of locals were done in yearly by the toxic fumes of the concentrated “skonk oil”, which was brewed and barreled daily by “Big Barnsmell” (known as the lonely “inside man” at the Skonk Works), by grinding dead skunks and worn shoes into a smoldering still, for some mysterious, never specified purpose. […]”