Running in the Incles’ valley (Andorra)

Last weekend, we took the opportunity of July 14th being a national holiday in France to make a short 4-day trip to Andorra. We selected Andorra, in the middle of the Pyrenees Mountains, in order to escape from the hot weather of Toulouse.

On Saturday and Sunday we did some activities including trekking, but with Andrea being just below 2 years it was difficult to cover any meaningful distance.

As I always do, I took my running gear in the suitcase just in case. And on Sunday evening I decided to go out for a run on Monday early morning…

… I woke up at 6am, quickly dressed, ate a toast, some orange juice and took the car to go from our rented apartment in El Tarter to the beginning of the Incles river valley. From there a short 3-km route (“easy”) departs to the end of the road CS-270 where the “bar d’Antoine” is located. The previous day we had done that stretch by a touristic electric bus, and it was that hop that triggered the idea. I parked the car and just equipped with the running gear, a baseball cap (Oakland Athletics), a 400mL plastic bottle of water in one hand and a photo camera in the other, I went to complete that Incles’ valley route followed by another one “Lakes of Siscaro” (“medium”) and back.

In all it was just over 13.3km, with about 800m of positive climb (an average slope of +18% in the last 3.8 kilometres to the summit), reaching up to 2560m, leaving the Siscaro lakes (at an altitude of 2325m) behind to complete the climb up to the mountain ridge to see what was at the other side. It took me about 1h20’ to climb (the 2 routes estimated at 45’ + 1h45’) and 1h10’ to come back, in all 2h27’. I made several short stops to take pictures, videos, talk to a Frenchman who was enjoying a morning sandwich at the top of the climb and to take a refreshing bath at one of the lakes in the way back.

Climb elevation of the run.

Map of the Incles valley.

On the way up, I only saw a man waking up at the Siscaro refuge (~2140m) and the above-mentioned Frenchman at the very top. Other than that the experience was running and climbing for almost 7km alone in the mountains just listening to the water, birds and some other animal, while watching to the changing colours and lights of the dawn. It felt a little bit like the character of the movie “Into the wild”. 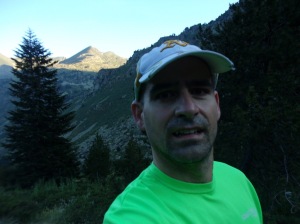 At some point climbing at ~7h30am.

On the way down, apart from falling twice, it was much lighter if not easier. I crossed paths with several fully-equipped mountaineers who at about 9am still had ahead of them some 3 to 6 hours of trek (if wanted to complete the same route than I did). 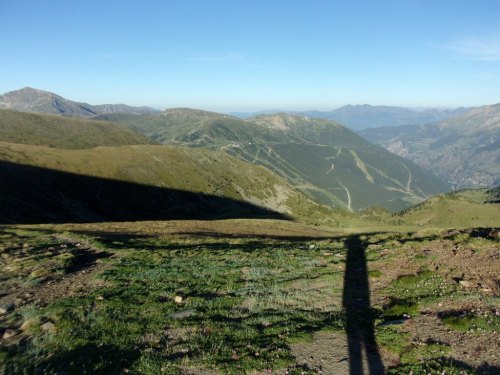 View at the other side of the ridge.

When I got back to the parking lot at the bottom of the valley, I changed t’shirts, drank from a bottle of water I had left in the car and felt like “when is the next such solitary mountain climb?”

P.S.: Finally, I just wanted to share this video I made for a friend, Maicol, just before taking a bath at the lake.