Today, March 8th it’s International Women’s Day. In the last few days I have seen a significant buzz in social media about the day. In particular I read a couple of pieces that made contribute to the buzz with this post.

Equal pay benefits men, too. Here are four reasons why, backed up by our Global Gender Gap Report. [PDF, 6.1MB]

There are three basic concepts underlying the Global Gender Gap Index, forming the basis of the choice of indicators, how the data is treated and the scale used. First, it focuses on measuring gaps rather than levels. Second, it captures gaps in outcome variables rather than gaps in input variables. Third, it ranks countries according to gender equality rather than women’s empowerment.

I attach below a screenshot showing the top 30 countries in the list.

Some comments to it:

Coming back to the question: “What’s in it for me?” The report shows how countries in which the gender gap is lower also have good scores in several other metrics which improve the conditions of life for men as well. There is the catch. See below the comparison for the Human Development Index and the Global Competitiveness Index: 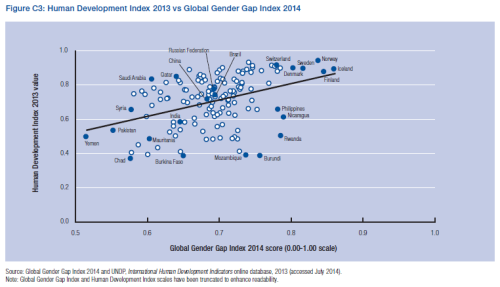 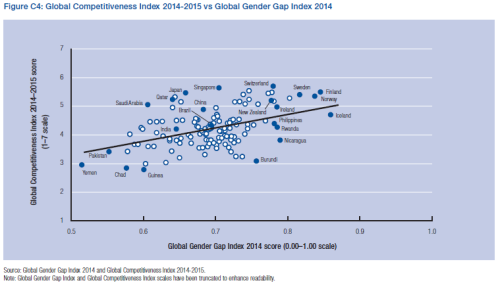 What can you do to help to close the gender gap? In your community you can do much. See this other open letter also in World Economic Forum from Belinda Parmar, “To men, for International Women’s Day“:

We need you to listen. When we tell you about a problem, we don’t want you to jump to a solution for us. We just want to say it out loud to solve it ourselves knowing that you will support us.

We need you to value our differences. Realise that we bring a different perspective and encourage us to bring our personalities to work, to not feel like we have to put on a ‘male suit.’

One step further: what can you do to help to close the gender gap in the countries at the bottom of the list? (those with the letter a in the names)

A few days ago I received an email from Jason Riggs of Kiva, the world’s first and largest crowdfunding platform dedicated to alleviating poverty and expanding financial inclusion (about which I have written before in this blog (2)). Kiva has launched Kiva.org/Dreams to empower even more women to reach for their dreams and they asked me to help them in making this campaign more widespread. Thus, here is my contribution:

By visiting Kiva.org/Dreams, you can back a dream by choosing a woman whom Kiva should lend $25 to. There is no cost to you. By choosing her, you help her to follow her dream of starting or growing her business, sending her children to school, and ultimately, gaining financial independence.

When women have the resources to make their dreams a reality, the world changes. More children go to school, more food is grown, and nations are more peaceful and prosperous. A case in point: if women farmers had equal access to farming assets and finance, they could increase their crop yields up to 30% and 150 million people who go hungry every day would be able to eat.

By contributing to the success of an entrepreneurial woman who has overcome obstacles, we discover so much more about our own resiliency, possibility, and potential. Each of us has a part to play.

Together we can make dreams a reality for thousands of women around the world. So in honor of International Women’s Day and the power of women, back a dream at Kiva.org/Dreams.

My suggestion: visit the site of Kiva, filter by Yemen, the country at the very bottom of the list and help dreams come true, gender gaps close and turning around the situation.

(1) I like the approach for its different persuasion approach, not like the closing the gap out of equal treatment, fairness, justice… wasn’t engouh.

Filed under Economy, Helping others

I recently read an article titled “Why don’t women run airlines?” I found the question interesting, because I have had some conversations about the number of women and especially in management positions within my company.

Surely there are a lot of issues and reasons behind (e.g. what is called “the glass ceiling”) that have been well-studied. When encountered with this question, I asked my senior peers within the department how many women were in their class at the university when studying aerospace engineering: the answer was one or none. That is the proportion of women that one could expect should be in the top management of the company now.

Luckily the trend now is changing, but still, in general, the aerospace sector is lacking women. I compiled some statistics:

Even if there was no discrimination, I believe it will take some years before 32% of EADS workforce and top management are women (~25 years? when the proportion of the students now in the university reaches all stages of the age pyramid of the company). I guess the same will apply for airlines.

I’m afraid it may never happen that 50% of the workforce in the company are women, probably not until 25 years later than we see such a proportion in the aerospace engineering schools… which 5 years ago was still 32%.