This post is a continuation to a previous post in which I described the first leg of our flight from Toulouse-Lasbordes to Corsica. If you haven’t yet taken a look at that one, I would recommend you to do so, as you would miss basic information and dozens of beautiful pictures of the French Mediterranean coast.

In the previous post I included images up until Cuers. There we refueled the aircraft and I took the controls of the aircraft, with Jean Louis (Asier‘s flight instructor) always by our side. This time Asier took the pictures.

Some curiosities about flying over the sea:

Flying around the Corsican coastline: Cargèse.

Notice Jean Louis (the instructor) with the life vest on. 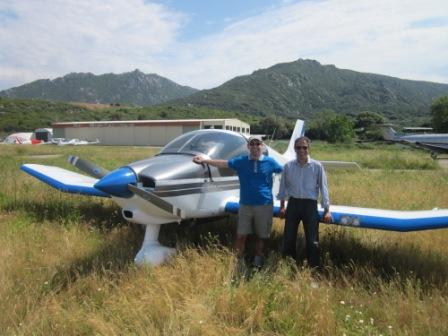 Jean Louis & me, at Propriano airfield.

The aircraft, a DR-44, put to rest for the weekend at the airfield.

Since we are normally flying within continental France we are not required to produce a flight plan for the air traffic control. This time as we wanted to cross over the sea to Corsica it was required to do so. Thus, this was the first time we prepared one (another learning point!).

“Olivia”, French site where to file a flight plan.

One remark: it is incredible how much eases the communication with air traffic controllers having sent the flight plan beforehand, as they expect you and they know beforehand more or less the information you are going to provide.

And so we made it! We flew from Toulouse to Corsica 🙂

It took us about 4h30′ of flying time (both flights combined). You may check the Garmin records of the first and second flights by clicking on the links, and the route we followed in this second flight in the picture below: 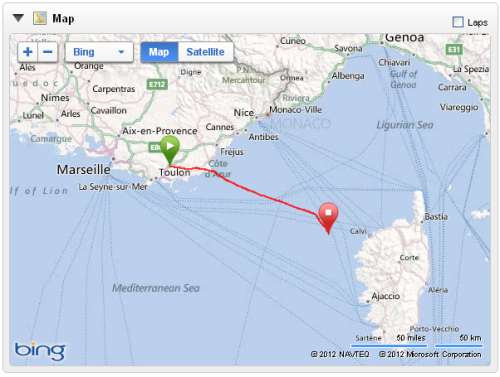 Even though I have mentioned above that we had planned for the contingency of having to water-land in the sea, the fact that the trajectory in the Garmin records stops at half way through Corsica in the middle of the sea does not mean that we indeed carried out such maneuver. Explanation: since we flew so many kilometers as compared to running (the normal use I give to the device), the memory of the GPS reached its maximum as it recorded one “lap” for every kilometer…