Is the average aircraft size decreasing or increasing by 25%?

See the graphics below: 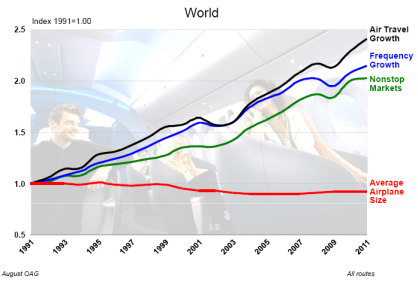 As I mentioned above, the information of actual evolution was provided by Boeing in 2012’s CMO.

This year (2013), Airbus seems to have responded by providing the same piece of information in its Global Market Forecast (GMF), see the picture below:

The catch then is: is the average aircraft size decreasing (as Boeing says) or increasing by 25% (as Airbus says)?

The best part of the catch is that both cite the same source of information, OAG (Official Airline Guide).

The reader will obviously reach to the conclusion that both companies cannot be taking the same segmentation and that they are using the reported trend to convey an interested message.

After, having seen the number plays that Boeing has recently done in their CMO with the mix of wide-bodies widely changing from year to year in order to promote 787 or 777 (which explained in this post), I take the stand to take with grain of salt the graphic provided by Boeing, and thus, unless I see the numbers by myself, I will understand that average aircraft size has been growing since the 1990s (1).

(1) The funny thing of understanding that the correct interpretation is the one of Airbus (average size has grown by 25%) is that this would mean that Boeing’s own prediction in 1990 would have been proven correct! 🙂