After many weeks here I am, back with the blog. Married and with a honey moon just finished, you can bet that most of the coming blog posts will be related to experiences we have lived during the trip. I will post them randomly, as I get to write them, without theme or chronological order…

This was one of the visits that we had arranged in advance. As you probably know Alcatraz was a high-security federal prison which is now closed, quite famous for having hosted some specific inmates such as Al Capone. There were many facts and stories about the prison that I wasn’t aware of before coming and called my attention. To name a few:

Together with the ticket you get an audio guide which provides a terrific amount of information and voices that really get you into the atmosphere and do guide you through the place. You get to see the cells of some famous inmates, isolation cells, the library, dinning room, you receive explanations about riots that happened within the prison and escape attempts, etc.

We took one of the night tours (and we recommend doing so), which departs late in the afternoon and includes a whole series of extra activities at night once the general visit is finished: a detailed explanation of the June 1962 Alcatraz escape (possibly the only successful one), a demonstration of the cells’ doors’ opening and closing system (see the video below), the hospital, etc. In the end we spent over 3 hours in the island.

See some of the pictures we took below: 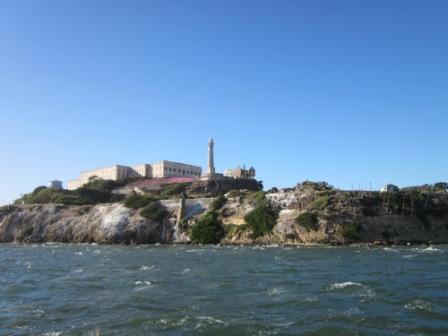 Up close view of Alcatraz.

One of the cells.

In one of the corridors.

Great views of San Francisco from the island.

Listen to the slamming of the cells doors (the guide made some emphasis to us trying to think what did that sound convey us):