Leadership perspectives from a TOPGUN pilot

A few days ago, I attended a conference by an executive from Airbus recently founded subsidiary A³. The talk was on Leadership Perspectives, from his experience in government (as a White House military aide for two US presidents), as an aviator in the US Marines, within the aerospace industry, etc. The resume of David Kalinske is impressive, take a look at his profile here.

The conference in itself was rather classic and straightforward; going from a discussion on the definition of leadership to its main traits (no charisma, extrovert or outspoken type of person among them, by the way), principles of a good leader, a few key lessons learnt, some best experiences and recommendations, with a questions and answers session at the end of it. Plenty of common sense.

There were, however, two sections from this speech that I found especially interesting and unique, which were the ones based on his takeaways from having served as a military tactical pilot (graduated in the TOPGUN school) and as an aide to presidents G. W. Bush and B. Obama. I will share below some of those takeaways with a few comments from my side.

Lessons learned from the White House:

The main takeaways, that I personally got from this conference, based on his general presentation and particularly on his experience as a pilot and in the White House, are: effective team work (including trust, empowerment, delegation), continuous candid and constructive feedback and keeping an optimistic attitude (including the reaching out of new experiences, getting yourself out of your comfort zone).

(1) David mentioned that even for dogfight flights that would not last more than 45 minutes they would have a post-flight debrief of up to 8 hours. This impressed me. I write myself a post flight report after every VFR flight, but my report may be about 1 DIN A4 length.

In this post I wanted to share the list of books I read along the year (1) with a small comment for each one (2), links to Wikipedia articles about the book (if available) and to the authors (in case you want to read about them). I have also included a small rating from one to three “+” depending on how much do I recommend its reading:

(2) In this 2015 I have not written many dedicated posts about the books I have read (just one about the “The Spirit of St. Louis“), but I do not discard making a review of some of them in the future. 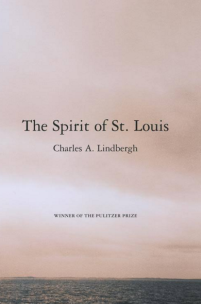 Charles A. Lindbergh is without a doubt one of the aviation (1) figures and legends of the XX century, being the first pilot to fly non-stop across the Atlantic ocean in May 1927, managing to win the Orteig Prize. Lindbergh wrote “The Spirit of St. Louis” in 1953, as an autobiography because he was not comfortable with the previous books written about the flight, especially “WE”, as it did not cover with enough exactitude the experience. For this book Lindbergh was awarded the Pulitzer prize on 1954 in the category biography.

I bought this book at the US Air Force museum in Dayton a place that without a doubt stimulates the passion for aviation and I read it in the months while I was completing the last stages of my training as a private pilot, which also contributed to the setting of the stage for the reading.

The beginning of the book covers the days of Lindbergh working for the postal service of the Robertson Aircraft Corporation, the flights along the USA from Saint Louis to Chicago, the incidents due to the weather or the fall of the night, the landings on fields at night with the help of cars’ lights, etc.

As an aviation enthusiast, Lindbergh gets interested in and then engaged into the race of who would be the first pilot(s) to cross the ocean. A crowded race at the time in which many of the great aviation aces were involved, including names like René Fonck or Charles Nungesser (two of the three top French WWI aces (2)).

He later describes the conception, development and testing of the aircraft by the Ryan Aircraft Company in San Diego, the purpose-built airplane he flew for the feat and how they managed to get a Whirlwind engine from the Wright company.

The author finally describes the days in New York before the departure, where up to 3 teams were getting ready to depart and how in the morning of the 20th May, having received positive weather reports from boats in the Atlantic, he takes off. The flight lasted 33h30′ which he describes hour by hour: how he is feeling at each moment, alone, squeezed in his seat, with scarce food and water supplies, cold, flying day (within the clouds at times) and night, thrilling at times and semi-unconscious (sleep), and how his mind is drifting. Until he sees land in Ireland, finds the route to Paris and lands in Le Bourget.

What I liked the most of the book were the description of the flying experiences as a postal service pilot and the development phase of the aircraft. Those are very interesting pages, full of concepts and anecdotes.

It took me months to complete the reading of the book. Why? I was stuck and I advanced very slowly in different parts of the narrative of the 33-hour-long flight. I would say that Lindbergh did that in purpose: writing hour by hour, a few pages per hour, describing what was going on, how his mind got distracted, how he began to remember memories from years back, how he suddenly found once and again that he had lost the bearing and needed to correct it, how he cursed himself for the lack of attention or being on the verge of falling sleep… I felt caught many nights in the same sleepy, somnolent mood. Unable to read more than one or two pages before falling asleep. If that was really the purpose of Lindbergh I cannot know, but, if it was, he was very skillful in conveying the length of those hours and the risk he went through. However, it goes against the readability of the book itself!

Some quick personal reflections I took from the book:

As I always do, I marked several pages and underlined different passages that trigger different thoughts. See some of them below:

“[…] I don’t wish my competitors hard luck. Crashed planes and flyers in hospitals impair all of aviation, and destroy the joy of flight.“

“Landing on one wheel and a wing tip with a highly loaded plane isn’t very dangerous when a pilot is well acquainted with his craft. […] it has been done many times. The newspapers always make it seem a good deal worse than it really is.”

“On our mail route, the pilots expect forced landings. We don’t average a hundred hours between them.”

“Science, freedom, beauty, adventure: what more could you ask of life? Aviation combined all the elements I loved.”

“A pilot has the right to choose his battlefield – that is the strategy of the flight. But once the battlefield is attained, conflict should be welcomed, not avoided. If a pilot fears to test his skills with the elements, he has chosen the wrong profession.”

“I wish I could take an aeronautical engineering course. […] I could work hard to understand the magic in the contours of a wing.”

“Now pretty soon you fellows are going to think you’re pretty good. It happens to every pilot. Usually starts when he’s had about 25 or 30 hours solo. I just want you to remember this: in aviation, it may be all right to fool the other fellow about how good you are – if you can. But don’t try to fool yourself.” (advice from his instructor in the Army, Master Sergeant Winston)

“No matter how much training you’ve had, your first solo is far different from all other flights. You are completely independent, hopelessly beyond help, entirely responsible, and terribly alone in space.”

“One old Negro woman came up to me with serious face and asked, ‘Boss, how much you all charge fo’ to take me up to Heaven an’ leave me dah?‘ “

The book includes several very interesting appendices about the flights of the aircraft, technical data and maps, prizes collected…

After completing the flight, Lindbergh made some tours around the world until the airplane was finally retired after 174 flights and 489 hours of flying. Today it can be visited at the National Air and Space Museum in DC.

If you like aviation, I do recommend you the reading of the book.

(1) I would say that the size of his fame, legend and iconic figure is not restricted to the aviation world.