Aerospace, a high-tech sector in Spain

Two years ago, there was a televised debate prior to the general elections in Spain. I remember I was watching it with friends and the incumbent president said “Spain is the leader country in the technology of air refuelling aircraft”. Since those friends watching the debate with me and I work in the aerospace sector we appreciated the comment.

Many things have happened since them, but one has not changed: aerospace sector is one of the most technologically intense in Spain. 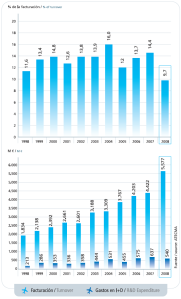 Regarding the employment, there were 36.160 employees of which over 15,000 were graduates, engineers and managers; 41% of the workforce consists of highly qualified employees. The employment of the sector has been doubled in the last 10 years.

Aerospace sector has presence in 16 regions, with the highest contribution from Madrid (63% of revenues and 57% of employment).

After this brief description of some facts (see ATECMA report for a more detailed view of the sector), I want to remark the technological intensity of the sector.

Aerospace sector invests about 10-15% of its revenues in R&D. This is by itself an impressive, figure: Spanish economy as a whole invested in 2007 1.27% in R&D, thus aerospace invests 10 times as much as the economy average. If we said that the weight of the sector was 0.51% of Spanish economy, the aerospace R&D represents 5% of national R&D investments. Even more, if we only count R&D executed by companies, aerospace R&D contributed with 8.5% of total private R&D.

I included in this post the report from COTEC because it makes a distinction among the different sectors dedicated to technology in Spain: manufacturing vs. services, and high technology vs. medium-high. It uses categories derived from INE (Instituto Nacional de Estadística), and there we see 6 sectors classified as “High Technology Manufacturing Sectors”:

Combining the data from this report with data from ATECMA (using 2007 figures for comparison with COTEC), we reach the following findings:

Indeed, it seems a high-tech sector.

If you wish to compare Spanish A&D with other European countries, please see the ASD reports (AeroSpace and Defence Industries Association of Europe).