After the year 2015, there will be no airplane crashes

When I was writing in the previous post about Alberto Dubois idea of evolution being exponential I had in mind the book “Augustine’s Laws”, to which I have referred many times in this blog.

Today, I read a very good article in last week’s issue of The Economist, “Defence spending in a time of austerity”, which describes the current situation of defence budgets around the World and how it will affect many programmes…

The article itself is referring to the computing evolution depicted by Dubois and some other exponential trends identified by Augustine, such as the increased use of computer power and software.

I especially liked the update of Augustine’s chart for the Law XVI which says:

“In the year 2054, the entire defence budget will purchase just one aircraft. This aircraft will have to be shared by the Air Force and Navy 3½ days each per week except for leap year, when it will be made available to the Marines for the extra day.”

Thus, in the last 25 years, since Augustine wrote his book, the business has not improved much. This situation provokes that different countries have to share weapons, e.g., C-17 transport aircraft (Strategic Aircraft Capability, operated for several countries from Hungary), SALIS (“Strategic Airlift Interim Solution”, chartering of ex-soviet An-124 to NATO countries)…

One of the most striking situations that may come to happen is that UK and France share two aircraft carriers. Carriers were considered essential to have control over oceans… however, if France is going to scale its fleet down to one single carrier: what would happen during the long months when it will be in overhaul?

Lately there have been much discussion about this sharing scheme, though it is still denied by officials. Consider that just back in 1940, the British Royal Navy destroyed much of the French fleet in the Operation Catapult.

Other interesting point is the trend towards using unmanned aircraft versus piloted ones. Already in the “Aircraft Investment Plan Fiscal Years (FY) 2011-2040” (PDF, 0.2MB) that the US Air Force submitted together with its FY11 budget request, it forecasted that the number of unmanned aircraft will almost triple in the next ten years, while the rest of fleets would be either just renewed or decreased.

Nevertheless, this may never come to happen if we take Augustine’s Law Number XIV:

“After the year 2015, there will be no airplane crashes. There will be no takeoffs either, because electronics will occupy 100 percent of every airplane’s weight”.

Two years ago, I found an excellent free online 40-minute course about Earned Value Management. It was in the website of the UK Ministry of Defence (MOD) Acquisition Operating Framework (AOF).

Some days ago, I wanted to check it again and it was still available. If you are interested in the topic, check it. 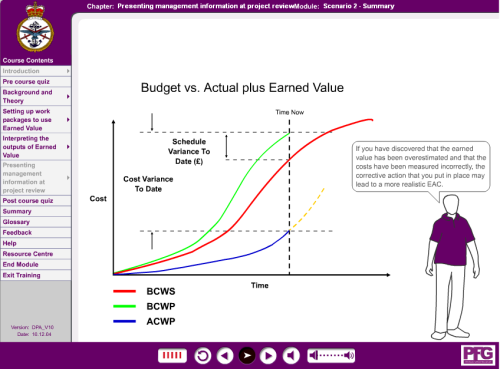 I have never seen an EVM course as good as this one, no matter how beautiful the name the consultancy training company gives it.

Some time ago I also read a well-structured book on project management, “Guide to Project Management“, by Paul Roberts. I recommend this one too.

Aerospace and Defence programmes are formidable undertakings full of complex developments, new technologies, changing requirements that make them difficult to manage and keep in control. This is not new and lead Norman Augustine to write his famous “Augustine’s Laws” of which I already wrote a post in this blog.

Few months ago I was having lunch with my colleagues while we were discussing about some current defence programmes with sound cost overruns and delays. One of us challenged the rest with the question of what was the programme in the direst situation. Among the answers came the British Nimrod Maritime, Reconnaissance and Attack (MRA) Mk 4 aircraft programme.

The programme called for the upgrade of existing Mk 2 aircraft. The upgrade involves extensive (80%) reconstruction of the airframe, plus incorporation of many new components, including engines, wings, landing gear and general systems, as well as new flight deck and detection systems. The contract was awarded in January 1997. The original order was for 21 aircraft.

One of my colleagues jokingly said “that programme is just the perfection of the British A&D business model: charging money to the tax payers without delivering a single aircraft, being paid simply for developing”. We all laughed at the comment, sure.

In 2002 the contract was reduced to 18 aircraft. In 2004 the in-service fleet requirement was reduced to 12 aircraft, including the 3 prototypes. By 2008 BAE had only been contracted to for 9 aircraft in addition to the development contract. In 2009 the Defence Equipment Minister announced that it was not necessary to upgrade the 3 development aircraft.

When first ordered the programme had an estimated cost of 2 billion pounds; by 2006 the estimation was of ~3.8 billion pounds (+90%). When ordered the first delivery to the Royal Air Force (RAF) was scheduled for 2001, with the Initial Operational Capability (IOC) in 2003, on the delivery of the 7th aircraft.

Last week we could read in the British press that the air force chiefs to the Strategic Defence and Security Review had proposed to cancel the Nimrod programme in order save money under current budgetary pressures. The measure would “only” save now 200 million pounds, as most of the development and acquisition costs (~95%) have already been paid. The savings would come in the longer term, due to the saving of operation and support costs related to that fleet.

If this cancellation becomes effective, that would be consummation of that model: being paid (180% of initially estimated costs) for developing of a fleet of aircraft (along a period twice as long as initially expected) to end up not having to deliver those aircraft (not 21, not 18, not 12, not 9… not a single one).

Aside from this humorous note, that would be a very sad happening for BAE engineers, managers and technicians.

The Stockholm International Peace Research Institute (SIPRI) is, in their own words, an independent international institute dedicated to research into conflict, armaments, arms control and disarmament. Every year they publish their famous SIPRI Yearbook with data about international conflicts, defence spending, defence companies…

In a previous post I showed cartograms of countries relative to their defence spending, etc. In this post I want to show a bit about the industry.

From the information of last year’s book, we find that of the 10 world biggest defence companies 6 are US companies and 4 European, though the biggest one is the British BAE Systems.

Among the first hundred companies (121 including subsidiaries) there are 4 Spanish: CASA (EADS), Navantia, Indra and Santa Barbara (General Dynamics). This places Spain as the 7th country by number of large defence companies. SIPRI publishes as well a fact sheet titled “Trends in International Arms Transfer”; in that one (data from 2005-2009) Spain is placed as the 8th country by arms exports.

Finally, with the information provided by SIPRI I built the following (simplified) table where you may see which are the biggest defence companies by revenues and see how much of their business is relying on defence activities (big conglomerates like GE or UTC do not rely heavily on defence).

Defence companies by defence revenues and reliance on defence.

US Defence companies by defence revenues and reliance on defence.

… and then taking a look at European ones: 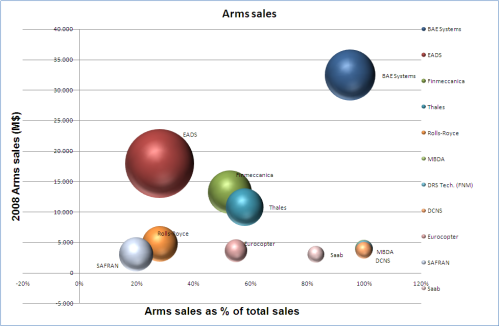 European Defence companies by defence revenues and reliance on defence.

You may see that the top-right corner is almost exclusive domain of US companies, except for BAE, which has a big presence in the US defence market.

In this latest table you would see how the complete picture (with all 121 companies) would look like, with an atomization of smaller companies at the bottom.