The Livonian is a language of the Finnic family, closely related to Estonian and spoken in the region of Livonia, in the North of Latvia and South of Estonia. I first came across the language in March 2003, during a students’ exchange in the framework of the European Commission Youth programme organized by the students associations of AEGEE Zaragoza and Tartu (Estonia).

During that exchange, in one of the evenings we attended an especially arranged concert in a small bar. The place looked like a cellar. The group of music was introduced to us as the only group singing in the Livonian language. I now wonder whether that group was “Tuļļi Lum“. Sincerely, I cannot remember the name of the group that played that night, other than being presented as the only band singing in Livonian. On the other hand, Tulli Lum was already existing then and the singer studied music in Estonia… who knows.

The Livonian is an endangered language. In 2003, it was introduced to us as being spoken by no more than ~120 people in the World. Today the Wikipedia mentions that the last known native Livonian speaker, Grizelda Kristiņa, died in 2013. Livonian may be spoken as a second language by over 200 people, just about 40 of those with a level of B1 or upper.

In that night in 2003, we were explained that the language was being supported by some European institution funds. It was 10 years ago, I cannot recall the details. I guess they referred to the European Bureau for Lesser-Used Languages (EBLUL). The EBLUL was a NGO set up to promote linguistic diversity and languages. It was founded in 1982 and had close ties with both the European Parliament and the Council of Europe, and was funded by both the European Commission and local and regional governmental organisations.

The European Bureau for Lesser-Used Languages was closed by a decision of its Board of Directors on January 27, 2010. The main official reason given was that “the funding mechanism of such an organisational model [was] not suitable in current circumstances”.

I came across Livonian again when playing with the UNESCO Atlas of the World’s Languages in Danger, which I discovered via Twitter. See a screenshot from the tool below, with the situation of Livonian, “critically endangered” and “revitalized”. 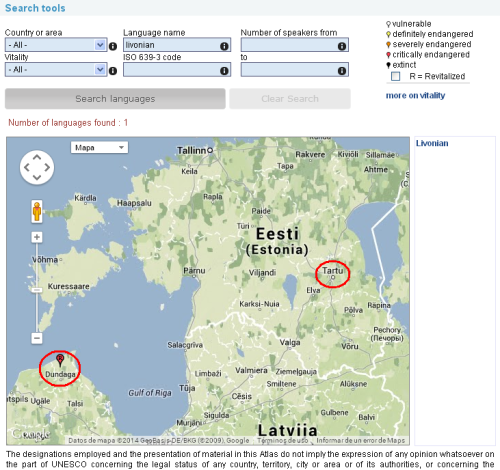 Livonian, UNESCO Atlas of the World’s Languages in Danger.

I found this tool from UNESCO interesting. I suggest you try it out a bit.

In respect to Livonian:

Surely, this is my opinion and I respect those who believe that each and every language should be preserved no matter what costs in the name of culture, historical heritage, and you name it. In UNESCO’s words:

Every language reflects a unique world-view with its own value systems, philosophy and particular cultural features. The extinction of a language results in the irrecoverable loss of unique cultural knowledge embodied in it for centuries, including historical, spiritual and ecological knowledge that may be essential for the survival of not only its speakers, but also countless others.

My view: I am a native Spanish speaker thanks to some language evolution that meant that once almighty Latin is no longer spoken outside of the Vatican City, plus the extinction of who knows how many ancient languages spoken by my ancestors.

It especially strikes me the language used by UNESCO: “ecological knowledge that may be essential for the survival of not only its speakers, but also countless others.” I guess it’s quite the contrary. Had a certain language been so essential to the survival of its speakers and its extinction would have not taken place (or am I getting something wrong with what evolution means?).

Luckily, the same evolution process has happened in all parts around the world: allowing over 400 million of people to speak Spanish as a mother tongue and allowing us to fairly understand each other in several corners of the world.

Language is the human capacity for acquiring and using complex systems of communication, and a language is any specific example of such a system.

Landing at a car racing circuit

Albi is small city close to Toulouse. It is mainly famous for its UNESCO World Heritage Site Cathedral Sainte Cécile and the museum of the painter Toulouse-Lautrec. I had been there twice, but I hadn’t yet written a post about the city. Today I’ll write about another special feature it has.

In Albi there is a car racing circuit. I have a colleague who likes cars, motor-bikes and has been already using that circuit in one of its open days.

Yesterday, I wrote a post about the stall exercises we performed in last Saturday’s flight lesson.

Let me connect the dots. On Saturday, while having lunch, our colleague told us that the circuit in Albi was having an open day that precise day. He encouraged us to propose to our instructor to fly to Albi. And here comes the catch: “Why?” Because the aerodrome of Albi, our colleague explained to us, is embedded in the car racing circuit!

We gave it a try, demanded our instructor to go to Albi and succeeded. See below the flight path recorded with my Garmin: 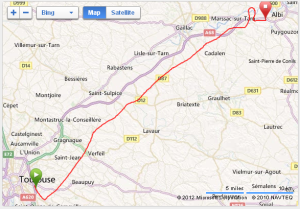 In the following screenshot of the Visual Approach Chart (carte VAC) you may see how when the circuit IS active the runway of the aerodrome is shortened as the circuit crosses the runway! (You may download the chart here, PDF, 360KB).

You may see it better below, in the Google maps view, how the circuit intersects the runway: 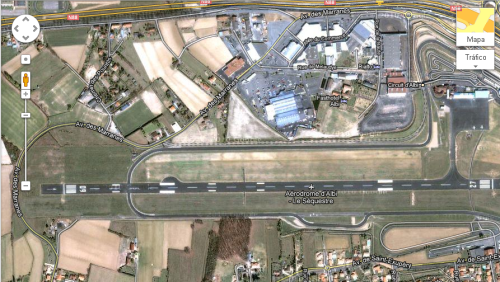 Finally, enjoy the video of the final approach of our flight. If you pay attention to it, you’ll notice the cars racing in the circuit while we are approaching and how we are in fact touching down only within the allowable space when the circuit is active:

International Day of the Book

Today is the commonly known as International Day of the Book. I learnt in the Wikipedia that it is actually called by UNESCO: “World Book and Copyright Day” (I wonder how the copyright part of it is celebrated…).

There, I also learnt that this tradition was originated in Catalonia, Spain, and that even though it is commonly stated that is the anniversary of the death of both Cervantes and Shakespeare (23rd April 1616), that is not correct as at the time England was using the Julian calendar instead of the Gregorian one, thus Shakespeare died 10 days later.

Recommendations. My contribution on this day is the recommendation of the 3 books of those I read last year that I liked the most:

In the same way I would appreciate if you leave your recommendation of the books that you liked the most of those you have read recently in a comment to this post.

E-Books. Two weeks ago I read in The Economist an article about the publishing industry. It cited a study, from PwC, which estimated that consumer ebook sales in North America will have a share of 6% of the market in 2013 (up from 1.5% in 2009). That would be one out of every 16 people. However, I think I only know of one person reading e-books as of today (a member of Excelencia who spoke about it a year ago). Let’s see if we find more people doing so: