One of the goals that I had for this year as a recently qualified private pilot was to make a flight crossing the French border. For this purpose, last July I approached a colleague, Asier, who had obtained his license years ago and already had the experience of having flown to San Sebastian, the destination chosen for the flight.

We took a day off at the office to have time enough to make the return flight on a day and avoid constraints with the availability of airplanes. The weather was very good early in the morning all the way from Toulouse to San Sebastian, with only some wind, and a few gusts by the coast.

On the way to San Sebastian we would make a short stop over by Pau. On the way back we had planned another one by Tarbes, but in the end we skipped it. The outgoing flight took us 2h28′ (engine running time, including the stop over) for over 176 nautical miles; the return one, 2h04′.

The navigation went rather well even if we didn’t make use of the GPS and just navigated using the charts, compass and VOR… It basically consisted in departing from Toulouse Lasbordes and flying around the CTR of Toulouse via the southern itinerary. Once arrived at the SN way point we took a west heading towards the VOR of Tarbes (TBO) and from there we sought the integration in the CTR of Pau. At Pau we simply went to the general aviation parking, drank some water, refreshed ourselves, rearranged some papers, visualized the second part of the flight and got ready for departure. While at the holding point we had to wait for an airliner and a French Air Force CN-235, a nice view considering that both Asier and I used to work for Airbus Military.

It was when flying around Pau that we noticed that the temperature of the oil was rather high, almost in the red zone of the arc. As the pressure was OK we decided to simply reduce the rpm. The action was succesful in lowering the oil temperature back to the green area of the arc, but we were forced to fly for the rest of a very hot day at a somewhat slower speed (between 150-170 km/h vs. the planned 180-200). 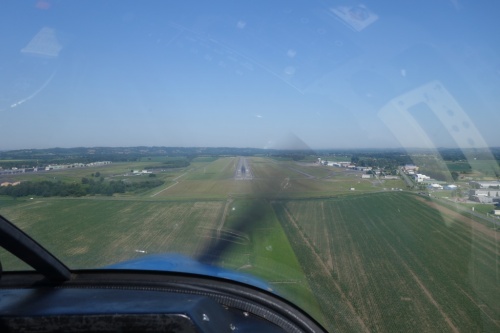 From Pau we followed the transit towards Biarritz via Orthez and Dax that follows more or less the high speed way and river Gave de Pau. We flew around Biarritz by the North and coastal transits. The bay and beach of Biarritz are wonderful on the ground, even more so from the air. In general it is a very recommendable experience to fly from Biarritz to San Sebastian, as despite of the turbulence that you may encounter the views are breathtaking. See the pictures and video below. 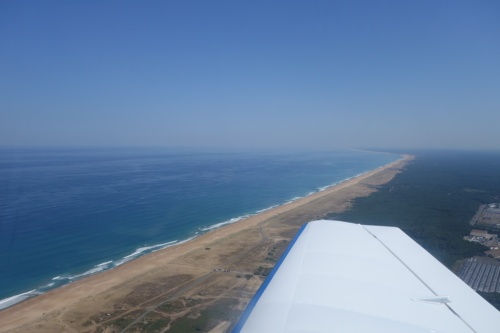 Leaving St Jean de Luz,the French air traffic controller bid us farewell in Spanish. Those were the first words in Spanish I ever exchanged in the radio as I obtained my license in France and the FCL055 to be qualified to speak in English when flying abroad, but I had never flown by myself to Spain. We then contacted the air traffic control at San Sebastian, who were waiting for us. While talking to the controller I felt very awkward, as despite of being a native Spanish and having reviewed aviation phraseology in Spanish the previous days, the terms and sentences didn’t come natural. I am sure that I used plenty of expressions that are either not correct or not in use. I noticed a couple of them by myself (“back track” the runway was employed by the controller in English, rather than a Spanish form I used or “Responde” for the transponder); there ought to be many more.

Air space around San Sebastian was very quiet. We demanded a clearance to make a detour by the bay of San Sebastian and come back to the airport in neighboring Fuenterrabia and it was granted without hesitation. Basically we could do as we pleased, we just needed to report when approaching the airport. After taking some pictures of the bay we headed back to the airport and we flew through the port of Pasajes, which I had visited on ground a few months before. 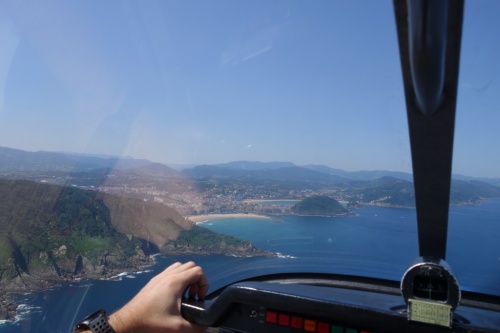 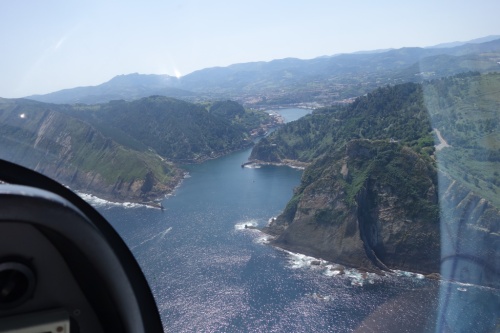 It took me a while to spot the runway in long final but the landing went smoothly.

We then went to have lunch with a relative of Asier at a close by restaurant and later had a walk through the village centre (Fuenterrabia).

About 3 hours later we came back to the airport. Just in time to take-off and leave before the weather deteriorated. Clouds were approaching the airport from Pasajes, thus we took off heading North (runway 04), with heavy cross wind (310 degrees, 15-20 kt) in what was the most difficult take-off I have experienced so far. Once on air, at Biarritz the controller adviced us (and any other aircraft around) to either land or fly inland as soon as possible as a front was approaching from the sea. So we did, turned east, inland, and continued our flight towards Toulouse. 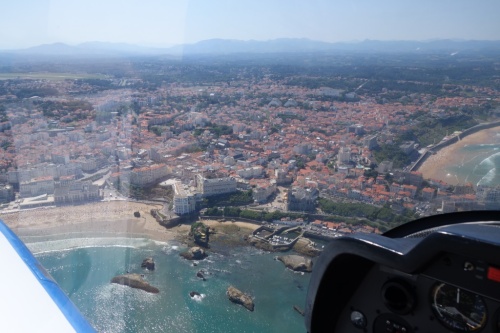 The rest of the flight went very smoothly, even though we skipped flying over Tarbes after having slightly diverted from our planned route as demanded by controllers. 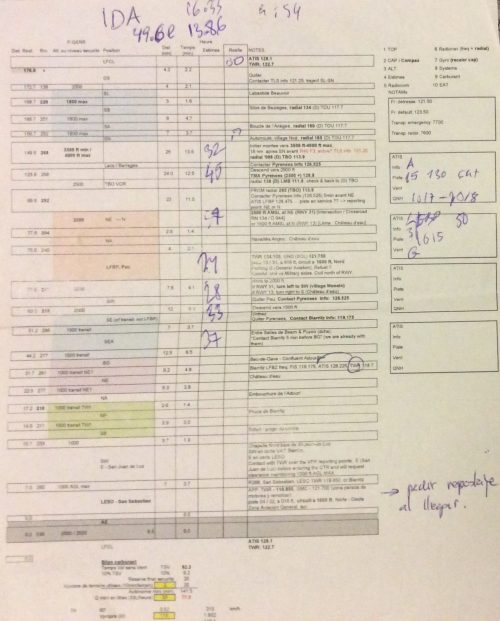 If you liked this post, find in the page Flight excursions of this same blog, a list of posts describing similar experiences to other destinations.

One response to “Flight excursion to San Sebastian”