“I’ll try to guess the figure of revenues for the Boeing Commercial Airplanes division, not so much trying to be accurate in itself, but to point in advance to the increasing of the discounts as we will see below.” (excerpt from the referred post)

As I already anticipated,

The implied discount of my revenues forecast would be in the ~ 50% range.”(excerpt from the referred post)

Quick post with the updated figures and graphic of orders, cancellations, deliveries and backlog of the 787 programme at the end of 2017.

For the fourth consecutive year above 100 787 airplanes have been delivered in 2017, 136 deliveries, the third year in a row with above or 135 deliveries. At that pace, the backlog is being consumed quickly, especially since in the last years the wide-body market has been rather sluggish.

787 orders, cancellations, deliveries and backlog through 2017.

In the last weeks, both Airbus and Boeing have released the figures of aircraft deliveries for the complete 2017. This is just a quick post to update a graphic with the commercial wide-body airplanes’ deliveries per year since 1969 (year of the introduction of the 747) till 2017 (1). 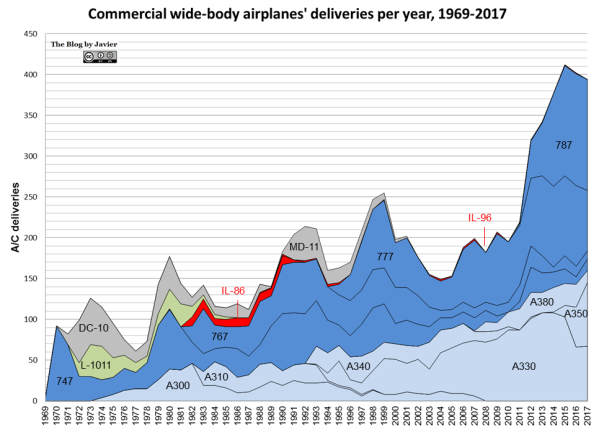 The average number of deliveries for the previous 20-year period (1997-2016) was 239 airplanes per year. Up to now, in the 49 years of twin-aisle market, in only 6 years more than 300 airplanes were delivered in a single year, the six last years, and only in other 9 years more than 200 airplanes had been delivered.

The combined steep production ramp-up during last years has enabled to reach a production rate of more than the double of what was produced in 2010. In particular, the combined compound annual growth rate (CAGR) of the rate of deliveries for the last 10 years has been 7.1%. These rates are above the yearly growth of traffic (measured in RPKs).

There were 136 787s delivered in 2017. A remarkable feat: one aircraft short of its 2016 record of 137 deliveries, the largest amount of twin-aisle deliveries of a single model in a single year ever. Only the 787 and the A330 have ever been delivered in excess of 100 aircraft in any given year (4 times for each aircraft).