During our last Christmas road trip, we made a stop by the Château de Chenonceau, one of those castles of the Loire valley that stands out among the rest and which we had wanted to visit it on ground since we flew over it in 2015. 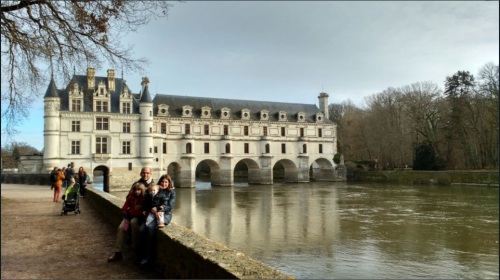 As the brochure of the visit tells, and the different panels along the rooms and corridors let you grasp, the Château de Chenonceau is a Ladies’ castle, due to the several women that left a mark in its configuration and history.

The first castle did not cross the river Cher, and was located at the small island between the gardens, where today stands alone the Marques tower (see the aerial view below), built after the castle was burnt down to punish the Marques family, the first proprietors of the castle.

The Marques family facing problems, the chamberlain of the king, Thomas Bohier and his wife Katherine Briçonnet, maneuvered to get in possession of the castle, which they started to rebuild to their taste, used if to host French nobility and to project an image of themselves.

They adopted common initials (TBK) that they displayed around the castle.

They created an aspirational personal motto while building the castle: “S’il vient à point, me souviendra” (i.e. if I get to the end of this construction, I will be remembered).

Years later, in 1535, being the castle in possession of Bohier’s son, it was taken by the king Francis I (to cancel out unpaid debts). After his death, his son, king Henri II gave it as a present to his mistress Diane de Poitiers in 1547. It was Diane who built the bridge to join the castle with the opposite river bank, and it was that move that started to make it unique.

At the death of Henri II, her widow, Catherine de Medici, forced Diane to exchange Chenonceau for another castle, the Château Chaumont, and made Chenonceau her favourite residence and a place full of intrigues for the years to come. She closed the bridge into a gallery (multi-storied), she added several rooms and bedrooms, made gardens more magnificent, gathered art collections and hosted parties. 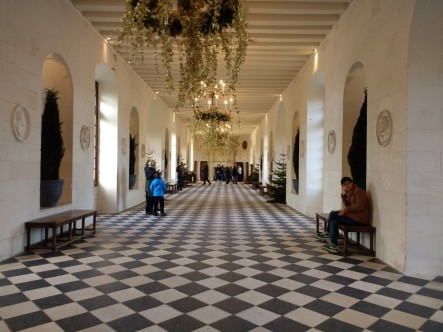 Ever since, the castle was to be linked to French royal family and later French nobility. There is a telling name of the power of the running family, that of the “Five Queens’ Bedroom“, named after Catherine de Medici’s two daughters and three daughters-in-law:

Once a widow, after her husband was assassinated, Louise of Lorraine, would retire herself to pray at the castle. A room would be decorated in black, being that another of the landmarks of the castle, under restoration at the time of our visit, though.

Further women would contribute to the enlightenment of the castle in the following centuries, renovating it, bringing in artists and writers such as Montesquieu, Voltaire or Rousseau. It even played the role of hospital where over 2,000 injured were attended during Second World War.