Last Christmas I received a funny gift: a fold-a-paper-plane-a-day calendar for 2016. That is a collection of papers with instructions and colored paper to fold a paper plane each day of the year. Doesn’t it sound great? This is just a short post to share a bit of info about it.

The creators of the collection are Kyong Lee and David Mitchell, apparently two experts in the field of origami with plenty of different models designed between the two. The collection in itself hasn’t got 366 different models. In fact, there are 40 models that after mid February repeat themselves once and again with different colors to complete the whole year. As I got some questions about it, I share here a link where the collection can be found.

After this short introduction let’s go to the best part of it, the airplanes themselves. Even if not all models are based on real airplanes (some models are not even inspired on airplanes but based on animals – birds, etc) some are, and when colored they provide a very good look of the original. Below I share some pictures with a general and some weekly overviews of the different planes and some comparison of the most beautiful and real-model-based ones. 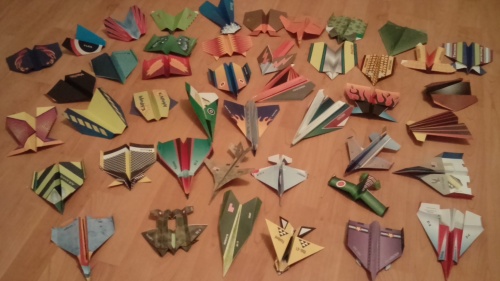 Rockwell B-1 Lancer  supersonic variable-sweep wing strategic bomber. Conceived to retire the B-52 (not quite yet) it entered operations in the late 80s and has played a major role in support of operations ever since.

Boeing 737. Derived from the 707, it first flew in 1967 and still today its newer versions are in production (nearly 9,000 have been delivered to date) and development.

Aérospatiale/BAC Concorde  supersonic passenger jet. Supersonic commercial flight was a dream come true from the late 70s to the early 2000s thanks to the Concorde. Only 20 units were built, each one now treasured in museums across the world, since difficult economics and a crash in 2000 ended it its retirement.

Eurofighter Typhoon multi-role fighter. Built by a consortium made by  Alenia Aermacchi, Airbus Group and BAE Systems, after its first flew in 1994 it was introduced in operation in 2004, being now the fighter aircraft of the main European air forces.

McDonnell Douglas F-4 Phantom II. Introduced in the 1960s, with more than 5,000 units built, it played a major role in Vietnam.

McDonnell Douglas F-15 Eagle. Since its introduction in the late 1970s, with more than 1,000 units built, it plays the air superiority role for the US air force and several others.

General Dynamics F-16 Falcon. Multi-role fighter introduced in the 1970s, with more than 4,000 built, still in production, now by Lockheed Martin, for export.

Lockheed P-138 Lightning. Introduced in 1941, with more than 10,000 units built, it was the primary US fighter in WWII until the introduction of the P-51 Mustang.

Space Shuttle. Introduced in 1981 and retired in 2011. In those 30 years of services it completed 133 successful launches and landings.