In a previous blog post I used FIFA world rankings to see which was the “group of death” of the following Brazil 2014 World Cup finals.

I received some comments questioning FIFA ranking based on the position of some specific countries: Switzerland, Portugal, Argentina, Colombia, Chile… I am sure that when one looks at how each country is playing he will believe that this or that country plays much better than the other placed higher in the ranking. But, the goodness of the ranking is that it removes perceptions from the process and simply establishes a set of rules by which all teams are going to be measured. It then goes on computing teams’ results along the year and the positions in the ranking are established, for good and bad.

In one of the comments I received I got the suggestion to rather use ESPN Soccer Power Index (SPI) ranking. I was even more attracted to that hint as the ESPN SPI index was introduced by the economist Nate Silver of worldly fame, who many readers will know from his forecasts on recent elections in the USA (check his blog FiveThirtyEight).

In a post from 2009, when the SPI was introduced, just before the 2010 World Cup, he explained how the index was computed (“A Guide to ESPN’s SPI rankings”). As he explained, the process had 4 main steps: 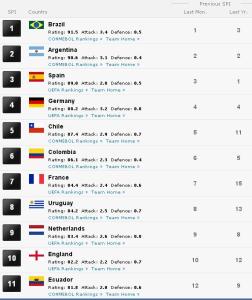 Other details of the ESPN’s approach are similar to those used by FIFA: e.g. giving weights to results depending on the opponent, measuring the competitiveness of the match, the different confederations, etc.

You can see the top ranked countries at the picture above.

Without entering on whether this or that country is far better placed in one or the other ranking based on perceptions, one simple yardstick to measure them is to see how many of their 32 top countries are not among the 32 countries qualified for the World Cup:

With the information from the ESPN SPI ranking I produced the same table: 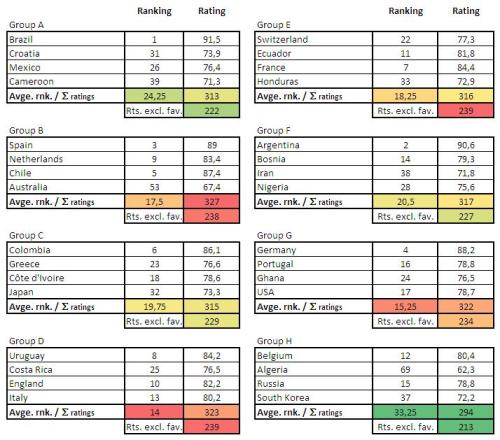 And then, the same analysis as in my previous post follows.

The most difficult groups in terms of total ratings are:

Looking at the average ranking, the most difficult groups are:

And excluding the rating of the favorite team (pot 1) in each group, which is the favorite facing the toughest group?

Then, combining the 3 approaches, the toughest group is between B (in terms of combined ratings) or D (in terms of average rating and from the favourite point of view).

Using the ESPN ranking group G would definitely would not be the toughest one, but the 3rd toughest.

I would understand ESPN journalists calling group B or D the toughest one. What strikes me is why FIFA website content editors call group B the “group of death” if by their ranking that group would be the group G!

It will be interesting to see how one ranking fares against the other at the time of predicting the actual development of the Brazil 2014 World Cup.