Last Sunday, yet again, we took one of the aeroclub’s DR-400 airplanes to make another family flight excursion.

On the occasion of the previous excursion, last week, I introduced the phares aéronautiques, i.e., aeronautic lighthouses that were set up in 1920s to allow night flight navigation for l’Aéropostale courriers. Last week we spotted a couple of them to the South East of Toulouse. This time, we wanted to spot a couple of them to the North West of Toulouse, on the way to Bordeaux, in the villages of Canals and Malause.

Last week, we prepared quite well the spotting, checking in Google maps different views of what we would try to see from the airplane so that we could easily recognise them. This time, we prepared less, just marking a cross in the map with the approximate location of the phares and hoping that we would identify the lighthouses on the ground.

Well, the task proved as difficult as finding a needle in a haystack. We missed the phare of Canals in the first leg. We then continued over flying the Canal Lateral up to the water slop of Montech (1).

The navigation of this flight was rather simple, as once over the Canal Lateral we kept flying over it northward up to the Pont-Canal to the East of Moissac (2).

We then flew along the river Tarn until it flows into the Garonne and then the Garonne until Malause. We then knew that the phare would be to the North of the river, the canal, the railway and a secondary road. See it below.

If you haven’t been able to spot it, it’s OK. You’re not the only one. We didn’t spot it at first sight. We flew in circle to have a second chance. I reduced the speed from 190 km/h to 150 km/h, to see if at a slower speed we would see it better.

Saw it already? Not yet? Don’t worry, I didn’t either. But you see, I was at the controls, at the left side of the cockpit. But you… you have here a frozen picture, you’ve got no excuse not to see it. In fact, you’ve got the picture because Luca is starting to be a hell of a spotter.

Once at home, I researched a little bit and found this local website about the phare (in French), with a couple of pictures, some data, history of these phares and a nice chart from 1932. It explains that the lighthouses started to be built in 1923 and that by 1932 there were 140 of them across France. This one at Malause was operated by the family Jolly until 1948/1949. 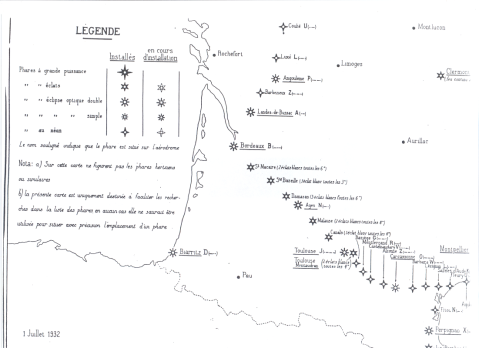 On the way back to the aerodrome of Toulouse-Lasbordes we passed by Moissac and Montech again and failed to spot the lighthouse of Canals again. Next time. 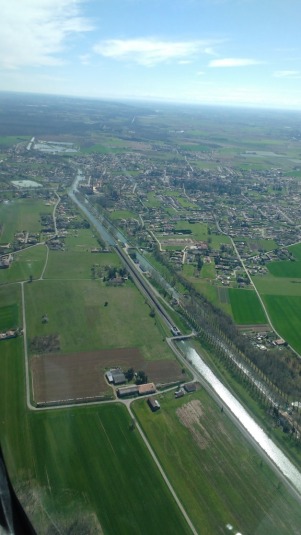 Finally, see below the navigation chart with the route followed marked on it. The total engine running time of the excursion: 1h15′. 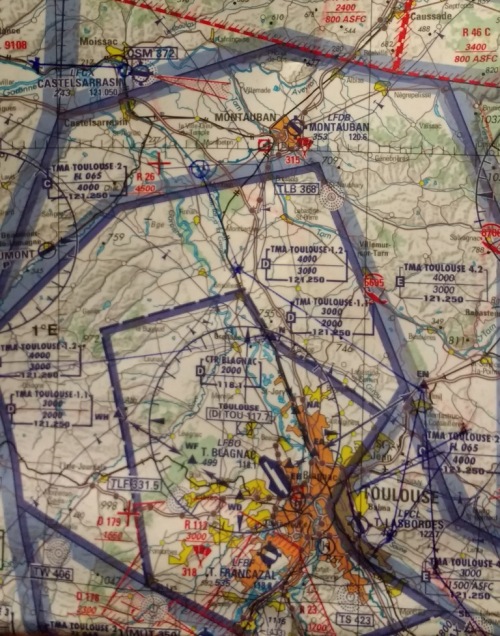 (1) See here a post in which I described the concept of the water slope and a post about another flight excursion in which we took some more pictures of it.

(2) See a post about another flight excursion in which we took some more pictures of it.

Flight excursion to Montferrand’s phare aeronautique and the Pyrenees

Last Sunday, we took one of the aeroclub’s DR-400 airplanes to make another family flight excursion.

This time the purpose of the flight was twofold: (1) we wanted to spot a couple of phares aéronautiques, i.e., aeronautic lighthouses that were set up in 1920s to allow night flight navigation for l’Aéropostale courriers, close to Toulouse, and (2) we wanted to take benefit from a sunny day around Occitanie to make a tour around the snow-covered Pyrenees, something we already did about a year ago when we completed the route of the Cathar castles (see here a post about it).

See below the quick reference paper navigation log prepared for the flight.

A few months ago, a friend of Luca, Tijmen, tipped us on the existence of these aeronautic lighthouses. See in this website a map with the precise location all of them had, including those still standing.

Once we had spotted the phare in Montferrand, we took to the South to start the climb to above 10,000 ft in order to fly over the Pyrenees.

Approaching the Pyrenees, we flew over the old castle of Montsegur, which we had already seen before when we flew over the Cathar castles. See below a couple of pictures, in context and in detail.

Once up there, we just enjoyed some minutes of flying around, spotting skiing stations, seeing possible routes through the mountains towards Andorra and Spain, enjoying the breathtaking views, taking a few pictures… 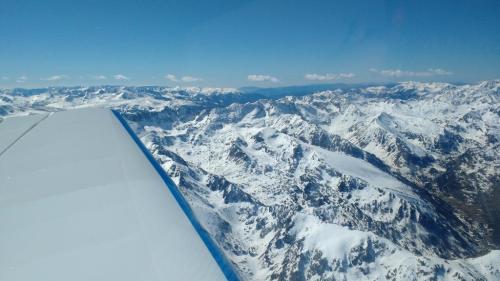 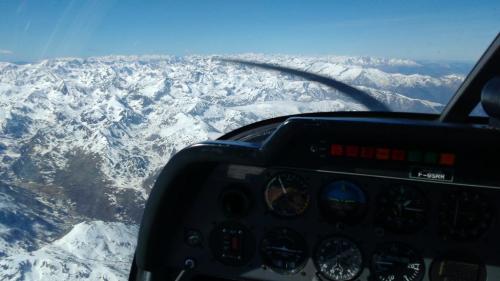 Finally, see below the navigation chart with the route followed marked on it and the navigation log as used. The total engine running time of the excursion: 1h28′. 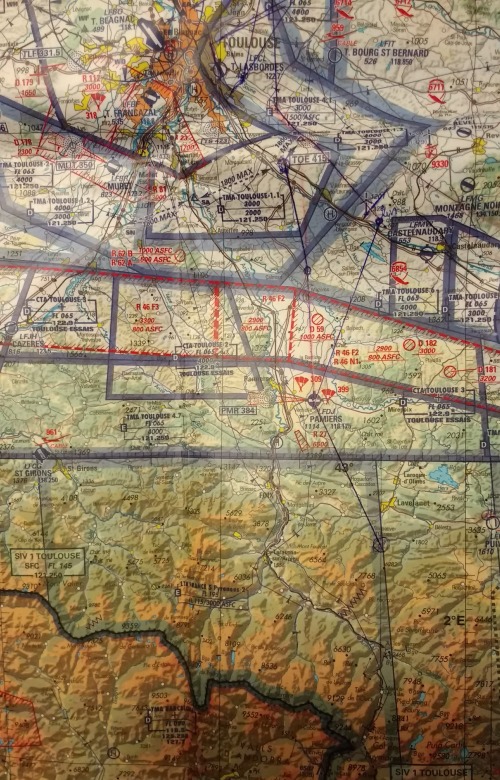 “Terre des hommes“ (of which English version was titled “Wind, Sand and Stars”, and apparently differs greatly from the French version which I read) is a compilation book of some memories of the aviator Antoine de Saint-Exupéry, of his time at the airmail carrier l’Aéropostale.The book was published in 1939, two years later he received the US National Book Award for this book. His most known book, “Le Petit Prince“, was published a few years later, in 1943.

Saint-Exupery failed to enter to Naval Academy and started studies of Fine Arts, which he did not finish. While doing his military service, he took flying lessons and there he discovered his passion. He flew first for the French Air Force, then he was a pioneer in the international postal flight, flying for the Aéropostale between Toulouse and Dakar, and later other lines. Those were years in which aviation differed very much to what it is today, and that is reflected in “Terre des Hommes“, where he pays tribute to some of his colleagues, mainly Henri Guillaumet and Jean Mermoz, and he shares some experiences which seem today unbelievable.Those years at Latécoère (which airline later became L’Aeropostale) must have been truly remarkable.

Henri Guillaumet was another pioneer of French aviation who contributed to the opening of airmail routes through the South Atlantic and the Andes. He was said to be one of the best pilots of his time, “Je n’en ai pas connu de plus grand” (I’ve never known a greater one), said Didier Daurat, director of l’Aéropostale.

Guillaumet taught Saint-Exupéry how to see the land they flew over, noticing every minor detail, every tree, corner of a river, and getting to know the locals, their farms, etc., as that was the ground he would have to land on given the case:

Jean Mermoz, another French aviation pioneer, first flew for the Air Force and then for Latécoère. It is famous the quote from Daurat who, after Mermoz performed his entry flying exam, he told Mermoz “We don’t need acrobats here, we need bus drivers.” Of Mermoz, Saint-Exupéry describes when he was captured in Africa or how he opened routes through the Andes.

There are two stories in the book which are breathtaking. The first one describes a crash Guillaumet suffered in the middle of the snow-covered Andes. He crashed in the middle of a storm and once on ground, he covered himself with the postal bags for 48 hours. As there would be no one coming to pick him, he then walked for 5 days and 4 nights (without ropes, axes, food supplies, or any other equipment for the hike). In those moments, he only wanted to get some sleep but he kept telling to himself that his wife and his friends, all hoped for him to continue walking and he could not let them down. To keep himself awake he thought of movies or books and tried to mentally review them in his mind from end to end. However at some point he fell down and was not capable to stand up again.

But then, he suddenly thought that in the case of a disappearance the legal death would be established four years later and this would impede his wife to immediately receive the compensation from the insurance policy. This gave him the will to continue walking just for 50 more meters until there was a great rock where his body would be clearly visible the following summer.

He stood up and continued walking, not only for 50 metres but for 2 days and 3 nights more and he saved his life.

The second story is from Saint-Exupéry himself, when, together with his mechanic, departed from Senegal to Egypt. The last lap would take them from Benghazi (Libya) to Cairo. During that flight they suffered some engine issue which started with heavy vibrations and finally ended in a crash. This time was not in the snow-covered Andes, but in the middle of the desert (close to Simoun). Again, nobody would come immediately after them. Saint-Exupéry started to make some estimates of whether they would find them in 8 days if they had flown straight or in 6 months if they had suffered some drift (derive), and where to walk to try to be closer to civilization.

In that situation he remembered the words and the example from Guillaumet and he pushed himself one step at a time. It is daunting to read how in the night he buried himself in the sand to keep the warmth of his body.

Four days later, four days of thirst, hunger and lack of sleep, they were found by two Bedouins with camels in the desert in Libya.

The figure of Saint-Exupéry is today of worldly fame and I believe that one has to read this book (1) to really know who he was.

(1) Apart from “Le Petit Prince“, which I commented here, I have also read his “Vol de nuit” and “Pilote de guerre“, which are short novels based on experiences very close to what he lived and described in “Terre des Hommes“.