During last days I had some fun learning different terms used in the shipping industry while investigating some possible investments. Let me share some of these examples:

“Panamax”: this is a term for the size limits for ships traveling through the Panama Canal.

(Did you ever have such an idea of the size of the Panama Canal?) 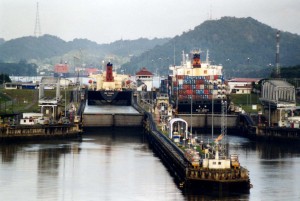 The two ships seen here seem almost to be touching the walls of the Miraflores Locks.

The same applies to the term “Suezmax”.

Another curious term is “Capesize“… which meaning by now you may already guess: “Capesize ships are cargo ships originally too large to transit the Suez Canal (i.e., larger than both Panamax and Suezmax vessels). To travel between oceans, such vessels used to have to pass either the Cape of Good Hope or Cape Horn. [I especially liked this last clarification] In effect Capesize reads as “unlimited”.” (Sure, once you have to travel around in the open ocean… you put the limit).

Lastly, “Deadweight tonnage”: this is “the sum of the weights of cargo, fuel, fresh water, ballast water, provisions, passengers, and crew.” It is curious that in the shipping industry this is also called “payload” according to the Wikipedia, while in the air cargo industry we refer by payload to just the weight of cargo / passengers…