I guess that all these changes didn’t give me the stability needed to fulfil all the objectives I had set myself at the beginning of the year… but don’t think 2012 wasn’t rich of events and fun. Have a seat in the roller coaster and run with me:

Sports. I wanted to do plenty of sports… in the end I run some 1,500 kilometres. I competed in 9 races, including tonight’s San Silvestre and two marathons: Paris and Berlin. I set personal best times in marathon (Paris, 3h45′) and 10k. I was not able to do so in half marathon due to an injury in the summer. Injuries forced me to run some 300 kilometres less than in 2011.

The year 2012 caught me running in Toulouse, Paris, Berlin, Torrelodones, Madrid, Sevilla, Rijswick, Papendal, Huelva, Asturias, Gaillac… so in a way it was also a year on the run. I also played some paddle, swam some days (including at North Sea, latitude 58º…) and got started with golf!

Learning. This year was also heavy on the learning side. It could have been much heavier if I had reached all my objectives. On the job I had to learn a great deal about configuration management in Airbus and will have to continue to do so, about leading and managing teams, about A400M aircraft systems…

Off of the job:

Reading. At the beginning of the year I wanted to read at least 15 books. I started well, but in the end I have finished just 10 while being half way through other 4. Check out “my 2012 reading list“, including just the finished ones.

Investing & helping others. I again set myself high objectives for saving and investing. This year however, the engagement changed the focus of the savings: from stock market to a preference for cash, at least until all the wedding expenses have been paid out. On the charities side: this year I directed 0.9% of my net income to different NGOs (soon I’ll make a similar contribution, check out which ones will I support this time).

Travelling. This year either with Luca, with friends or alone, I visited Monaco (flying aboard a helicopter again!), Seychelles (where I proposed to Luca!), Asturias (twice), Huelva, The Netherlands (Papendal, Rijswick), Berlin – Nürnberg – Munich, Sevilla (twice), Madrid, Scotland, Corsica, Nancy, Geneva… those were the leisure trips; the job made me go to Madrid another 20-25 times (?), that made it tiresome and difficult to combine with other things.

Javi 2.0. For another year I kept it up with the blog. I recently reached 300 posts. I’m not sure whether I’ll always write about 100 posts per year, but if life keeps getting more interesting and I’ve got the time, count on it. 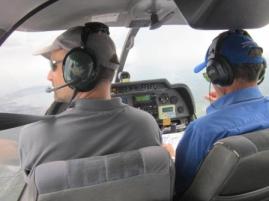 Flying back from Corsica.

Flying. Last year I took on flying lessons. I was slower in this front that had wished to, though it wasn’t always easy to find time slots to fly with so many trips on weekends. I recently surpassed 20 flight hours and started with go-arounds in the airport. Without any doubt, the trip to Corsica with a colleague was the best flying experience of the year. I’ll hopefully start with solo flights at the beginning of 2013 (beware!).

Other reasons for joy…

Now it’s time to rest, celebrate and soon to update the objectives setting for 2013. I believe I’ll give myself a more relaxed set of personal goals to cope with job changes, personal changes and else. One thing I am sure of: 2013 will be, again, the best year of my life!

(1) This post is becoming a classic of the blog (like those talking about aircraft discounts, best and worst posts, charities I support, etc). You can see my 2010 and 2011 recaps.

At the beginning of the year I set out my objectives for 2011, of which I have achieved 71.4% (just above my 70% target!). One of them was only to “become again a frequent runner”, for which I set up some modest steps, e.g., buy new running shoes, run 3 days before mid-January, run a 10k popular race before November, lose some 10kg by June… If there was a yearly objective which I widely met, it was this one:

Learning. After taking some classes in Madrid, I continued studying French and now I feel more confident when facing shop attendants :-). I had to learn and continue to learn lots of new things every day at the new job where I landed about a year ago.

I still enjoy as learning moments the print weekly issues of The Economist or the monthly issues of Scientific American. I delivered the necessary speeches to become ACB within Toastmasters (though lately I’ve missed more meetings than I should). Finally, I read a dozen books along the year (a bit less than in previous years, though some in the new eReader!), being the ones I liked the most the following: first, second and third.

Investing & helping others. I set myself a high objective of saving and investing: I overachieved it by around 50%. I once mentioned it in Twitter: the best thing behind investing is the discipline of saving that is behind it. I not only dedicated a percentage of personal income to savings but as I announced in a post at the beginning of 2010, I directed a percentage to different charities. I initially set it out to be 0.7% of my income, but after raising some funds and contributing others to charities related to the races in which I am taking part, in the end this percentage has been well over 1% in 2011.

Travelling. We together visited Montreal, Ottawa, DC, Chicago, Omaha, and several places in the south of France and throughout Spain. The moment that I liked the most was attending the Berkshire Hathaway annual shareholders meeting, no doubt.

Javi 2.0. I continued to often write in this blog with some remarkable posts. I admit that my twitter account is one of my biggest sources of information / distraction.

Sports. Apart from the running, I recently re-started playing paddle with colleagues, became a kind of fan of the rugby local team, Stade Toulousain, had to subscribe to Canal + not to miss any of Real Madrid matches while living abroad.

Other reasons for joy have been:

To close the year, I started taking flight lessons, pursuing another childhood dream. This will allow me to continue learning and experiencing new things!

Now it’s time to update the objectives setting for 2012. This year the exercise will be easier as I already have the methodology and the habit. If the objectives are well chosen and challenging enough, next year’s account will be even shinier.